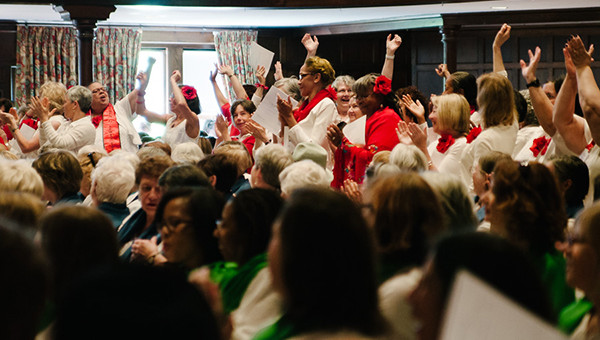 More than 1,200 alumnae made the trip home to Mount Holyoke from around the country and the world this year. Five classes welcomed back more than 100 alumnae each—an attendance achievement that hasn’t happened in a decade.

Classes ending in fours and nines and Frances Perkins alumnae all celebrated connections with one another and the beautiful campus that unites them over the course of two reunion weekends organized by the Alumnae Association. Attendees ranged from alumnae who haven’t been back to campus since graduation to those who have attended every five-year reunion for decades.

Both weekends featured Back-to-Class sessions, where alumnae participated in thought-provoking discussions led by faculty, staff, and sister alumnae on the theme of transformation. The parade during each reunion weekend was also a highlight, with alumnae dressed in white and carrying signs in their class colors to show off their distinct history and personality.

Following the parade, classes gathered in Chapin Auditorium to celebrate by reading their class histories, recognizing alumnae award winners, and announcing fundraising goals. The Alumnae Association’s reunion awards program recognizes the contributions of outstanding alumnae. Two volunteer alumnae award committees select recipients based on a twelve-month vetting process that includes extensive research on each nominee. View a complete list of 2014 winners or nominate an alumna. This year’s award winners include:

View photos and video of both reunion weekends»