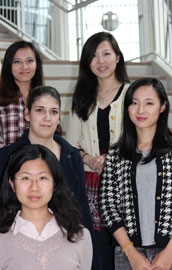 “I was given a camera; I realized I didn’t want to put it down anymore,” says Anna Muench ’13. She found that, in pursuing her passion, she had “accidentally become a business.” Muench is among a group who dreamed up ideas for their own ventures while still on campus. Seven were rewarded for their entrepreneurial ideas this year with $2,500 prizes offered by the Harold Grinspoon Charitable Foundation. Muench, who started her art photography business as a way to pay for textbooks, plans eventually to do photography full-time.

Several of the entrepreneurial award winners hail from China. “Mount Holyoke is famous among Chinese students applying abroad,” says Nan Zhu ’14, who is studying economics and multimedia design. She won not only a Grinspoon prize but also a Mount Holyoke “elevator pitch” competition organized by Steven Schmeiser, assistant professor of economics and complex organizations. He was mentioned by several Grinspoon winners for encouraging their entrepreneurial exploring.

Zhu’s idea is a website combining language training and video chat rooms for Chinese and American young people. Given the huge numbers of Chinese students who come to the United States to study every year, and the growing number of Americans studying Chinese, she sees the opportunity to create a “bridge.”

Muchang Duan ’13 conceived a travel business for Chinese parents visiting their children at US colleges. Having planned her own parents’ trip from Nanjing to South Hadley for graduation, she knows what a “tedious process” it can be.

Duan says about 20 percent of Chinese book their US trips through a travel agency. Yet Chinese travelers can present challenges—some do not speak English, they are not familiar with or accepting of foreign food, and they prefer guided tours in Chinese. She has designed a web-based platform for travel agencies offering customized deals aimed at Chinese travelers. If the idea is successful with the campus Chinese Students’ Association, she will expand it to the Five-College area, charging commission for travel agencies.

Other entrepreneurial prizewinners include Bei Li ’13, Yu Yan ’13, and Yihan Li ’13, whose idea is an online market for students to sell secondhand items such as furniture and clothes; and Andreea Bancila ’13 and Sophia Weeks ’13, who designed a programmable remote camera trigger.

»Read the feature article, “Lyons in a Bear Market,” from the fall 2013 issue of the Alumnae Quarterly.