A Brief Look at the Life of Betty Shabazz 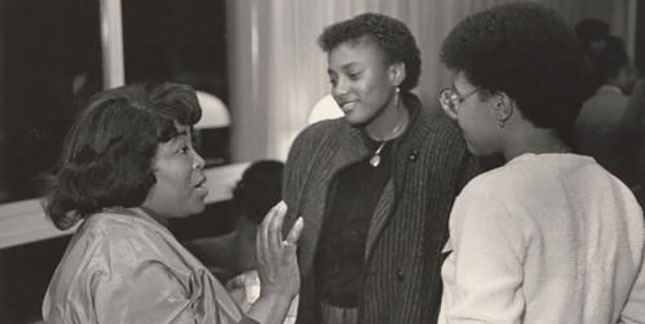 In 1980 the Mount Holyoke Association of Pan-African Unity renamed its cultural center on campus for Betty Shabazz. She spoke at its dedication and three years later visited the campus again for the Black Alumnae Conference. Many details of Shabazz’s life are unknow. What follows is a brief look at the experiences that led her to become one of America’s most unsung civil rights activists.

Betty Dean Sanders was born to young, unmarried parents in the mid-1930s, likely in Detroit, Michigan. Her exact birthplace and birthdate are uncertain, as her original birth records have been lost and other documents vary in their details.

She spent her early years in Detroit and Pinehurst, Georgia, in the care of her mother and grandmother until the latter’s death when Betty was six. By age nine, while living in Detroit with her mother, she started visiting a nearby shoe store owned by Helen and Lorenzo Malloy. A few years later, the Malloys took in Betty and raised her as their own.

Helen Malloy was a member of the Housewives League of Detroit and organized boycotts of stores that discriminated against African Americans, yet Shabazz’s upbringing did not involve discussions of racism. She wrote later: “Race relations were not discussed and it was hoped that by denying the existence of race problems, the problems would go away. Anyone who openly discussed race relations was quickly viewed as a ‘troublemaker.’”

In 1952 the Malloys, who deeply valued education, took up a collection at their church to help send Betty to the historically black college Tuskegee Institute (now Tuskegee University) in Alabama. Off campus she suffered the extreme racism of the Jim Crow South, and, because of this, moved—against the Malloys’ wishes—to New York to pursue a nursing degree at the Brooklyn State College School of Nursing. Betty continued to experience racism, and she was profoundly affected by it.

A fellow nurse’s aide invited Betty to a dinner party at the Nation of Islam temple in Harlem, where she met its minister, Malcolm X. In an interview in 1990, Betty said, “I really had a lot of pent-up anxiety about my experiences in the South, and Malcolm reassured me that it was understandable how I felt.” Betty began attending services a the temple, and by 1956 she converted and changed her surname to “X” along with the other followers, as it stood for the African ancestors they would never know.

Malcolm and Betty married in 1958. Six years later, they left the Nation of Islam and became Sunni Muslims. Malcolm soon completed a pilgrimage to Mecca after which he changed his name to El-Hajj El-Shabazz. Betty adopted the same surname.

While pregnant with twin girls in 1965, she and Malcolm’s four other daughters visited the Manhattan Audubon Ballroom to watch him deliver a lecture. There, they witnessed his assassination by members of the Nation of Islam.

Following his murder, Betty largely spent her energy raising her children, but she made public appearances around Malcolm’s birthday and the anniversary of his death. Her speeches kept her husband’s legacy alive and gave the opportunity to advocate for the causes most important to her: education and health care for African Americans and issues facing women and children.

Betty went on to obtain three more degrees, including a doctorate of education administration from the University of Massachusetts, Amherst. In 1976 she began working as an associate professor of health sciences at Medgar Evers College in Brooklyn, at the time a college of students who were ninety percent black and predominantly working class. She was promoted to director of institutional advancement and public affairs in 1980, the same year the College rededicated its campus cultural center in her honor.

Betty Shabazz died on June 23, 1997, from injuries she sustained in a house fire set by her youngest grandson, Malcolm.

—By Anne Pinkerton and Nicole Villacres ’18