Wa-shin-an, translated directly as “Peace Mind House,” is a “hidden jewel on campus, and a rare space to find at a college,” says Heath Atchley, manager of Mount Holyoke’s Japanese Teahouse and Meditation Garden. Built in 1984, the teahouse and garden are situated on the top floor of Eliot House, home of the College’s Office of Religious and Spiritual Life. Wa-shin-an’s composition, carefully designed by distinguished architects, is focused on the spiritual process of moving through the garden, into the teahouse, and reaching a state of inner peace. 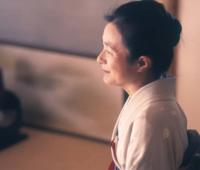 Read more about the Yamashitas and their contributions to Mount Holyoke’s community.
Web exclusive