A Closer Look: Author Under the Spell of MHC When Writing a Discovery of Witches 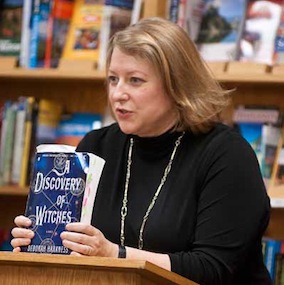 Deborah Harkness ’86 won acclaim for her scholarly works on the history of science, but the effusive praise greeting her first foray into fiction is another thing entirely. The saga of fiercely independent historian of alchemy (and descendent of witches) Diana Bishop and dashing geneticist (and vampire) Matthew Clairmont topped the bestseller lists its first week in publication and has been published in thirty-four countries so far.

Like the Harry Potter and Twilight juggernauts, A Discovery of Witches features otherworldly creatures, but the similarity ends there. For Harkness has performed some alchemy of her own, magically transforming her academic knowledge into an engrossing tale full of intellectual wonders.

Harkness, a professor of history at the University of Southern California, built her career writing and teaching about the sixteenth century, a time when scientific and supernatural explanations for natural events vied for acceptance. So she was understandably intrigued by modern popular culture’s similar fascination with the occult. “I kept thinking that a sixteenth-century person would be completely comfortable with [contemporary] stories of the supernatural and strange,” she says. So Harkness started imagining what today’s world would look like with vampires, witches, daemons, and ghosts. After about six weeks, she realized with a jolt that she was writing a novel.

Although Witches is set in Oxford, France, and New York, many of the story’s aspects trace their heritage back to Harkness’s experiences at MHC. “What I really wanted to do in this book was explore an issue I first became aware of at Mount Holyoke—the issue of a woman accepting who she is and the power she has,” Harkness explains. “MHC is an environment that’s very accepting and nurturing when it comes to realizing your full power. Then you discover that the world isn’t as hospitable as MHC was, and you have to go through the process all over again, learning not to give that up just because the world doesn’t support it.” That’s one of the lessons Diana may learn over the course of Harkness’s planned All Souls trilogy.

To create Diana and Matthew’s academic-centered world, Harkness draws from fields including literature, history, and science in a way that also echoes MHC. “The whole book is a kind of love letter to what a liberal arts college represents, in the way it situates you in a world of ideas and texts,” she says. “I experienced that for the very first time at MHC, and it is still very precious to me.”

While fashioning fiction about witches and vampires seems a world away from writing nonfiction scholarship about sixteenth-century humans, Harkness says the transition happened naturally. “I have a character-driven approach to history. I try never to forget that these were real people who had emotions and troubles, but historical evidence can give me only so much access to their world. I’m bound by the limits of evidence in my scholarship. What I love about fiction is that there’s no boundary.”

Read our full Q & A with Harkness, listen to a radio interview with her, or read an excerpt from Witches at alumnae.mtholyoke.edu/witches.