MoHome Memories: For Whom the Bell Tolls 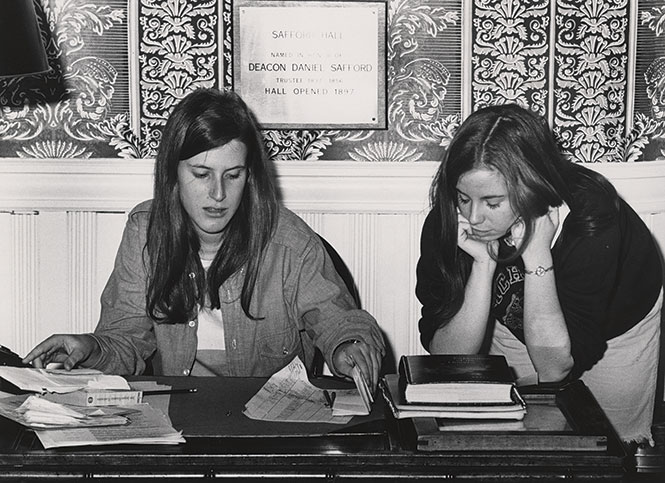 Students at the bell desk in Safford Hall, 1971
Photo courtesy of MHC Archives and Special Collections

Remembrances of a onetime campus job

For sixty years visitors to Mount Holyoke dorms rang a doorbell and were let in by a student covering the bell desk. Prior to the fifties, housekeeping staff monitored the comings and goings of each dorm, while students occasionally covered bell duty during the labor shortages of World War II. Beginning in 1951, all students were required to do work in their dorms, including bell duty, during which they were expected to sit quietly and read or study when they weren’t answering the door or calling up to rooms to announce guests. In the sixties, bell desks became more social hubs. Three decades later, with the introduction of the OneCard that gave students access to all campus buildings, bell desk workers were no longer needed and the position was discontinued.

We reached out to our alumnae community on Facebook and selected a few comments to share that tell the story of sitting bells through the decades.

“When I was there . . . sitting bells was a requirement, and it never seemed to be an onerous task. It was always fun to see who was going where and with whom, and there was always someone hanging out to chat with.”   —Ruth Gerard Poley ’58

“Not a job for us, but a ‘volunteer’ requirement, along with some dish detail in the kitchen . . . . Bells beat dishes hands down! Great people watching at curfew on weekends (yes, curfew). In loco parentis was alive and well, until we (’67) were the first to have keys to the dorm and no curfew second semester senior year.”   —Susan d’Olive Mozena ’67

“I sat . . . for all four years. I think I made $2.10/hr., so I made enough spending money that I didn’t have to ask my parents for anything beyond tuition, room and board, and books. I was usually able to study while sitting, so it was an easier job than most.”   —Joanne P. Legare ’78

“I was a lucky freshman in 1983 who landed a bell desk job. . . . I loved being the ‘receptionist’ for the dorm, talking with people, announcing pizza, flowers, and boyfriends, and getting to know my dormmates. I remember knitting, playing backgammon and cards, and occasionally studying.”  —Jane Zippe Putscher ’87

“I remember groups of students gathered around the TV watching Desert Storm unfold. . . . If you really *needed* to study, you had to put up a sign asking people not to stop and talk to you. Lots of chatting, a little studying, many great memories!”   —Stephanie Freed Charlot ’92

“Sat at Mead desk for one year. Everyone would stop by and chat with me, so I never got bored. When we switched to the OneCard I was pretty sad.”   —Sara McKee ’01