A Closer Look: Seeing in 3-D… at Last 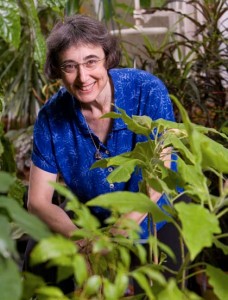 Sue Barry remembers the first time she saw the world in three dimensions.

She had just come out of her optometrist’s office, which she visited weekly for therapy to correct her impaired vision from crossed eyes, and was in her car. But something had changed. The steering wheel seemed to be floating in air and there was a real volume of space between it and the dashboard.

An eye-opening experience, literally, she nevertheless paid it little heed. The MHC neurobiologist thought her changed perception “was because of the fading daylight.” But Barry’s stereo vision was not a fluke and instead part of an extraordinary personal and scientific journey into the plasticity of the adult brain and the importance of considering the whole person in brain science and rehabilitation.

Barry was a college student before she realized that she lacked three-dimensional vision. Despite repeated surgeries as a child to help straighten her eyes, they were never fully aligned. As author and neurologist Oliver Sacks explains in the foreword to Barry’s recent book, Fixing My Gaze, by suppressing the image from one or the other eye in order to avoid double vision, she effectively nixed her brain’s ability to see in 3-D. Letters on the page jumped around; her eyes were easily fatigued, and driving was a nightmare.

Barry’s first-person chronicle of having her sight improved is not only a deeply poetic narrative but also a scientific history of her own and others’ vision problems. She points out that our educational system rarely makes a connection between children who have difficulty learning to read and vision problems. She was labeled a “slow learner” as a child and struggled for years to compensate for her incorrectly diagnosed disability.

When she did learn that her reading problems were physiologically related, it would take another twenty years until she discovered her brain was capable of being rewired to see the world in three dimensions. But it wasn’t going to be easy.

Referred to developmental optometrist Dr. Theresa Ruggiero, in Northampton, Barry at age forty-eight began a year-and-a-half-long series of daily exercises and weekly vision therapy to learn how to aim her two eyes at the same place in space at the same time, fusing the images to be able to see in stereo. “It’s humbling,” Barry says. “You have to begin at the beginning. I learned skills that most people learn during the first six months of life.”

But the benefits were astonishing. She now sees what she calls “the space between” objects—and not just in her car. For the first time, she has a sense of horizontal distance. And she finally understands the modern artist’s use of negative space.

Barry’s view of science has also changed. Once a reductionist who looked at individual pieces of evidence and then constructed a whole, she now understands that “a person is more than their circuit of neurons.” She has also become interested in the whole concept of rehabilitation.

“You really have to understand the person in the context of their whole life,” she says. “I didn’t say I wanted stereo vision—I didn’t know what that was, necessarily. But I had day-to-day issues that could be improved.” Like reading road signs.—M.H.B.