A House Becomes a Home: Inside the New Residence Hall 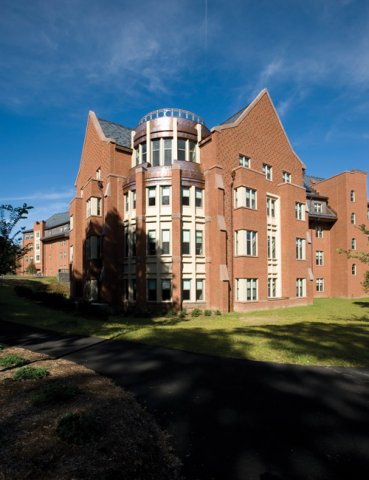 In late August, the first students moved into the first residence hall to be built on campus in more than forty years. The building opened to generally rave reviews (and some complaints as kinks, especially with the One-Card access system, were being worked out). Here’s a peek inside MHC’s newest student quarters.

“ My friends at other colleges are very jealous.”
—Casey Cokkinias ’10 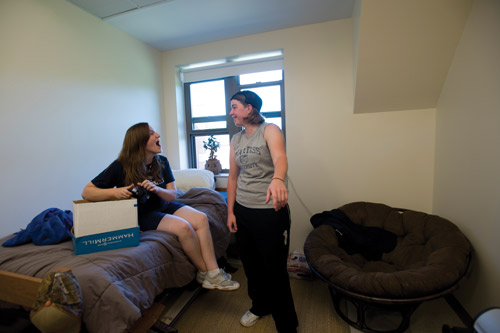 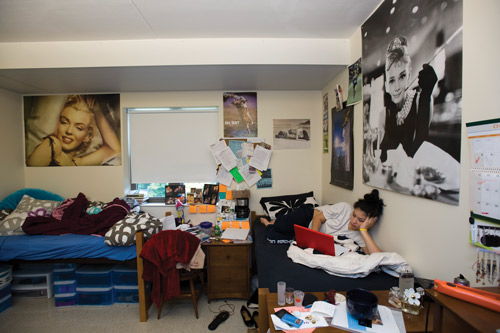 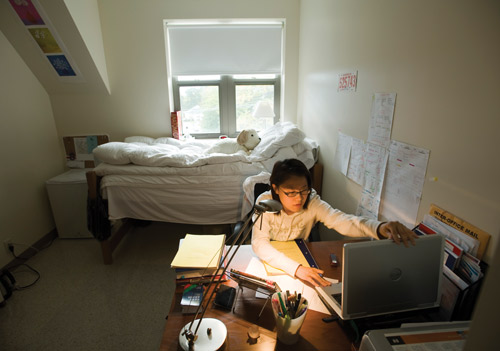 Students give thumbs-up to:

• having their own space, with close friends nearby
• common areas for TV watching, playing pool and foosball
• brand-new furniture
• how modern and environmentally friendly the building is
• the patio, and the view from it,
behind the residence hall 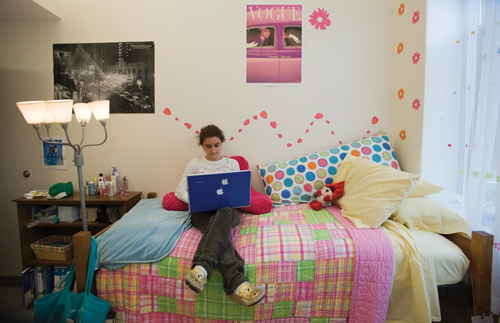 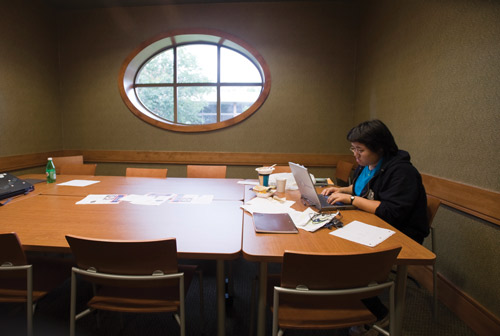 Students give thumbs-down to:

• needing a One-Card to unlock their rooms (Many forgot and got locked out of their rooms early in the semester.)
• the extra minutes required to walk to some academic buildings
• the challenge of creating a close-knit community in a large building 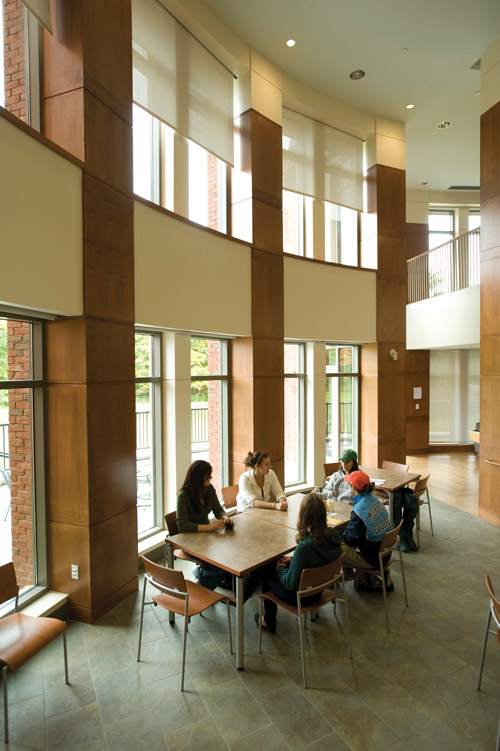 Where is the new residence hall?

The new building is where the parking lot to the right of Pratt Hall (the music building) used to be. Thus the new dorm faces Rooke Theatre, with Stony Brook visible behind the building. The far end of the residence hall is bounded by Morgan Street. 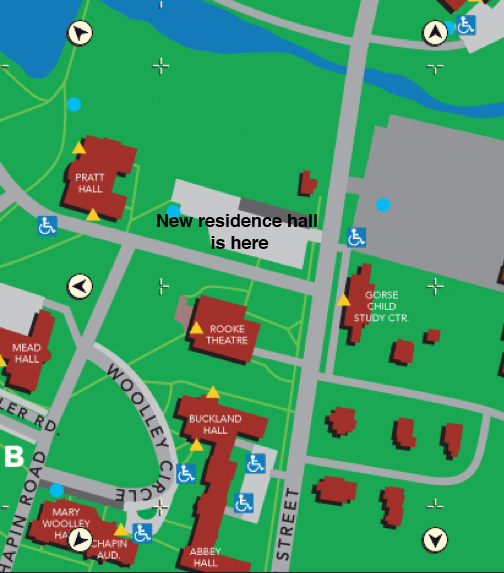 Does the new residence hall have a name?

It is known universally by students as “the new dorm” and has not received a more official moniker. 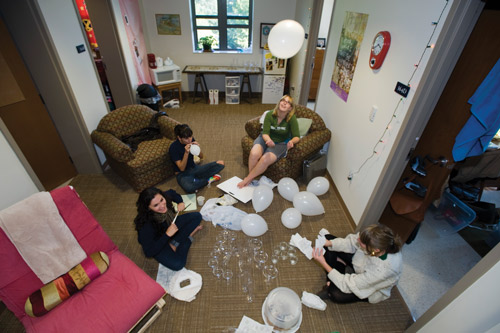 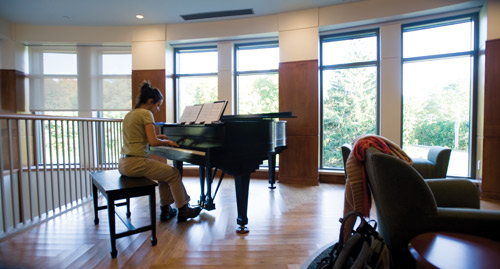 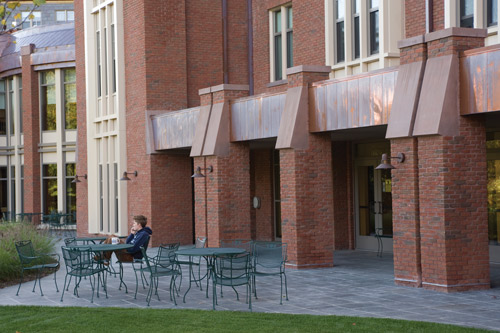 New Dorm on Campus: One Resident Shares Thoughts from Her First Semester 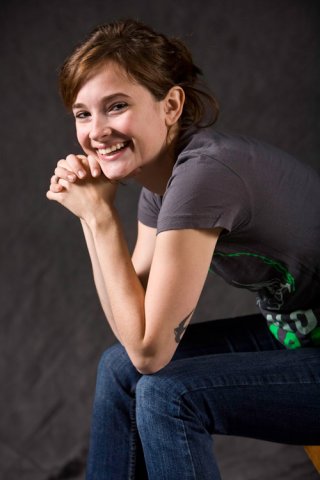 “Moving is hard,” said my fourteen-year-old sister, carrying a shoebox and a pillow toward the new dorm, as she wiped her brow with a free hand.

I looked at her—a full laundry bag looped over my shoulder, a comforter under my arm, a flimsy cardboard box full of books balanced on my knee, and a floor lamp in my hand—and shifted my weight.

“Yeah, right,” I said, rolling my eyes at her light load, and thanked the gods for the handicap-accessible doors that automatically open with the push of a button.

I walked into her on purpose and we laughed the rest of the way into the building, but stopped short in the lobby.

Sunlight filtered in through the tall windows, playing across the (renewable resource) bamboo floors. Beautiful flowers were arranged in vases along a railing, overlooking a clean, organized dining area below. Not far away, someone was playing the piano. Panels of mottled glass separated us from a cozy and stylish living room, complete with working fireplace.

“It’s like a hotel,” I said, forgetting the weight of the things I was carrying. My sister and I dumped our cargo in a corner and made a beeline for the flat-screen monitor on the wall behind us in the lobby, where a computer supplies up-to-the-minute information on how much energy is being used by the dorm.

The touch-screen monitor inundated us with “green living” facts and we quickly abandoned the machine and headed for the elevator, leaving our belongings behind for Mom and Dad to collect as they came through.

The third floor, while not nearly as awe-inspiring as the lobby, seemed wonderful to me. Easy chairs were positioned near windows overlooking Rooke Theater, and small tables held more flowers. I imagined myself curled up in one of the chairs, wrapped in a blanket and studying fervently, a cup of hot chocolate to cradle in my hands.

The hallway, a labyrinth of turns and dead-ends, eventually led us to my new home, Suite 364. The OneCard-capable lock on the front door slowed me down, but I managed to swipe us into the living room. (Rather than a lock-and-key system, swiping one’s student ID allows access, only adding to the impression of the building as a modern, card key hotel.)

The simplicity, the cleanliness, the space—I was home! Two easy chairs and a table populated the well-lit common room, with windows facing Stony Brook, the ‘Delles barely visible over the trees.

I went straight for the single I had coveted over the summer in the online floor plans—the largest in the suite, a corner room with four windows—hoping beyond hope that Bill Boerner (associate director of residential life) had assigned it to me. The light on the OneCard reader blinked green, and I pushed open the heavy (really heavy) door to my room.

The furniture was standard issue for dorm rooms, but I took an especial pleasure in knowing I would be the first to sleep on this pa
rticular mattress.

In fairly short order, both the common room and my bedroom had become disaster zones, and we had “christened” the room by nicking the wall with a futon frame (then with the bureau, then with a desk). It was quickly beginning to feel more like a home I was used to.

Soon my three suitemates had moved in and were unpacking. The social comfort was instantaneous; two of my suitemates were already close friends of mine, and the third quickly became the same.

It seemed as though we had overestimated the size of our common space, however. Two bed frames stood on end in the middle of the room, and boxes were stacked against the walls. Crossing the room necessitated stepping on futon mattresses, garbage bags of clothes, and milk crates of toiletries, and proved to be a pretty risky venture.

Almost four months later, not much has changed. The boxes are gone, but their contents remain. Coats, papers, DVDs, socks, and empty juice bottles are strewn across the floor of the common room, creating a sort of domestic minefield, the kind of which can only be created by four stressed-out young women, with more homework than time.

The suite hasn’t sustained quite as much structural damage as one would imagine could have been inflicted since Moving Day. The ultra-powerful doors have proven indestructible (and often, impossible to open) due to their weight. Perhaps their thickness deters fire; maybe they are that heavy as a precaution against Amherst’s young men. It takes two industrial-sized doorstops to prop one of the doors open, and even then, they are known to slowly close as soon as one’s back is turned.

Each woman living in the suite has already laid myriad curses upon the OneCard reader guarding her respective door. It is deceptively easy to forget a OneCard in the middle of the night en route to the bathroom, and return to find one’s door locked. Each mishap necessitates a call to Public Safety and a $15 lockout fee. One weekend was particularly brutal, as my suitemate Katy found herself locked out a grand total of four times.

The exterior of the new dorm is architecturally stunning, but overshadowed by a tangled mass of bicycles chained to racks and, more often than not, to one another. A second set of bicycle racks was quickly installed but fails to do more than spread out the disorder.

Since moving in, I haven’t been able to utilize all the wonderful amenities in the new dorm. In true Mount Holyoke fashion, my suitemates and I have been too busy with schoolwork and extracurriculars to utilize the billiards or foosball tables, or even find a quiet moment by the fireplace. Somehow, though, the simple knowledge that we could do these things (and plan to during J-Term) makes our residence in the new dorm seem that much more privileged and dignified, and becomes one more thing to brag about to those less fortunate, students who are forced to live in 1837 or Torrey, rather than in the brand-new “Holiday Inn.”

This past August saw the opening of Mount Holyoke College’s first new residence hall in forty years. Construction began on the 72,000-square-foot, 176-bed building back in November 2006.

[This information was provided by John Bryant, MHC director of facilities planning and management.]

One response to “A House Becomes a Home: Inside the New Residence Hall”