Photo of Wolff by www.portraitsbykim.net

Abigail Wolff ’82 is a personal assistant by day, soprano by night. In her downtime, she swaps a planner for a pitch pipe and takes the stage with the NYC-based a cappella group the MetropoliTones. “The ‘Tones,” as Wolff affectionately calls the ensemble, were founded in 2001. Since then, the group has released three albums and given several significant performances. The group has comprised alumnae from Seven Sister colleges, though last month, they opened auditions to all women.

At Mount Holyoke, Wolff was known as the girl with the guitar. She often strummed and sang in her dorm, and carried her guitar everywhere, even to an audition with the V-8s her first year. The V-8s were Mount Holyoke’s only a cappella group at the time and Wolff soon learned a cappella singers use only one instrument: their voices. Despite the rookie mistake, she was chosen and fell under the group-singing spell.

After she graduated and moved to New York City, Wolff longed for her melodious days at Mount Holyoke, where she was also a music major and a member of the Concert Choir. She met a fellow alumna Amanda Sapir ’99 who persuaded her to try out for the MetropoliTones, then directed by Erica Metzger Hare ’98. Wolff made the cut and has found a home in the group of committed singers for almost ten years. 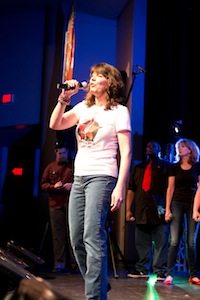 From their monthly subway jams to swanky club performances, the MetropoliTones have proven themselves noteworthy. The group of women is diverse, but they remain in harmony through weekly practices. Some of their larger audiences have been in sold-out stadiums, where they’ve taken the mic to perform the national anthem. When they’re not the opening act for the New York Jets and New Jersey Nets, the group rocks out at private parties, charity galas, and bar concerts.

Wolff enjoys connecting with the global music community when she goes to a cappella festivals with the ’Tones. Though she hadn’t heard of a cappella before she came to Mount Holyoke, Wolff is a convert. “It’s so much fun and I swear it keeps me young,” she raves.— Olivia S. Lammel ’14

Wolff is also co-organizer of this year’s holiday vespers concert in New York City on  December 7.  Get more information on the 78th NYC vespers.