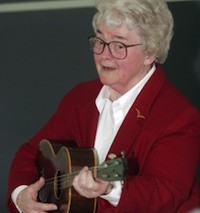 There was a time when Mount Holyoke women sang—not just the “Alma Mater” at commencement, but nearly everywhere, nearly every day. Gale Stubbs McClung ’45 remembers the time well, and tries to keep the tradition alive.

In her time at MHC, students sang after dinner, during class meetings, on the local buses, and in the “smoker” room of each dorm. There were frequent song contests and students composed their own ditties. Juniors taught their little sisters traditional college songs, odd- and even-year songs, and songs specific to each dorm and class.

“When I arrived on campus in 1941, we freshmen in Porter were told immediately that we were to have an original song prepared to sing for the juniors three days later,” McClung recalls. She and two friends wrote new words to a popular tune, and became part of Mount Holyoke’s musical traditions.

With few records and no television, students made their own music. “There were almost no cars on campus and few dates because of the war, so we were on campus a lot, and enjoyed getting together and singing all the time,” McClung recalls. Each class and dorm had its own song-leader, but only seniors were allowed to perform on the Skinner Hall steps.

McClung grew up in a musical family and says informal sing-alongs continued to be a major part of her life in the decades after MHC. For many years, McClung and her baritone ukulele have led thousands of seniors and returning alumnae in singing favorite MHC songs—from the “Fractured Alma Mater” to those with such intriguing first lines as “Ugly to look at and awful to know…” and “Put your foot on the loud, loud pedal/ Make lots of noise.”

To celebrate her ninetieth birthday this July, McClung performed a show of “nutty and naughty songs” for friends at her retirement complex. Ever enthusiastic, she says, “I’d like to perform even more than I do. If someone asked if I could do a sing-along next Sunday, of course I’d say yes!”