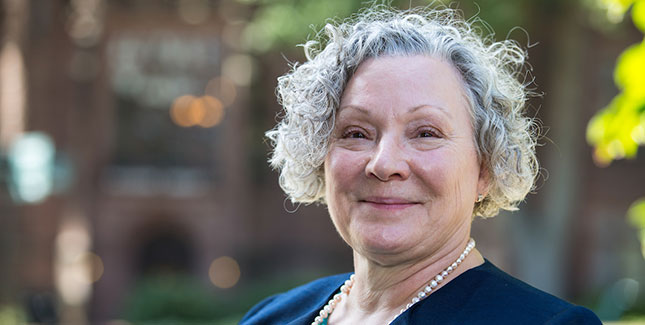 After a one-year term as president-elect, on July 1 Maria Z. Mossaides ’73 assumed the role of president of the Alumnae Association. As the Association’s next leader, Mossaides will guide the organization in its mission to provide diverse programs, expertise and resources to foster lifelong learning and to empower alumnae to connect with each other and with the College.

“I am very fortunate to be the first person to serve as the Alumnae Association’s president-elect,” said Mossaides. “The opportunity to serve on the board and to participate in the committees has given me a deeper understanding of the varied work of the Association.”

A Worcester, Massachusetts, resident, Mossaides has dedicated herself to social service, holding a wide range of positions in the public and independent sectors as an attorney and an administrator. She served for several years as executive director of Cambridge Family and Children’s Service until, in 2015, Massachusetts Governor Charlie Baker appointed her child advocate for the Commonwealth, a position she still holds.

Mossaides has served for more than 30 years in a number of volunteer roles for Mount Holyoke, including as committee chair for The Mount Holyoke Fund. When her daughter, Sophia Apostola ’04, enrolled at the College she began to see the many opportunities to foster connections between alumnae and students.

“Mary Lyon recognized that her graduates needed to support each other in order for them to achieve success in their chosen profession,” Mossaides said. “Early graduates paved the way for the next generation of students to follow. I cannot imagine the difficulties that these pioneers faced, proving that women could benefit from higher education. The one constant has been to support Mount Holyoke so that the College can educate the next generation of leaders. We can continue this commitment by connecting our alumnae with current students and providing the support to launch their careers and lives.”

Outgoing Alumnae Association president Marcia Brumit Kropf ’67 stepped down from her role June 30. “It has been my great pleasure to work with Maria this past year,” she said. “She is an experienced executive and leader, as well as a devoted volunteer. I am excited about her ideas for the future of the Alumnae Association.”