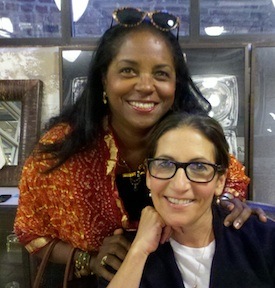 Eleven years ago, Nicky Mesiah left her sales job in the beauty industry to launch Mesiah Event Planners, a catering company with a healthy bent. “I love to eat, and I love to prepare food,” she says. Yet at the same time, she was concerned with the obesity epidemic and what she saw as a lack of healthy food options in Montclair.

As she cooked for bridal showers and birthday parties, and made lunches for the YMCA and the American Hearth Association, Mesiah quickly discovered that even healthy-minded eaters don’t want to sacrifice dessert. So she began experimenting with low-sugar, vegan, and gluten-free recipes. “What I bake does not taste like a twig,” she says. Indeed, her vegan oatmeal raisin cookies—named after makeup artist Bobbi Brown, who is a big fan—are crisp and satisfying despite not containing butter, eggs, or flour. Her Miss Nicky’s Cashew Toffee (also gluten-free) contains whole cashews, and no corn syrup, additives, or preservatives. (Maya Angelou, for one, has professed her love for these.) Mesiah’s desserts have proved so popular that she’s shifted entirely to baking; she’s partnered with a local caterer so she can focus on desserts. Mesiah, who was a sociology major at MHC, has fond memories of making custard on a hot plate in her room in the Mandelles.

Nicky writes: “Being healthy, not skinny, is our mission. Our custom desserts and gourmet toffee use the best ingredients to ensure optimum taste and—more important, optimum health.”

When Melva Max and her husband, Jean-François Fraysse, transplanted their French bistro La Lunchonette [sic] from the lower east side to the northeast corner of 18th Street and 10th Avenue in 1989, Chelsea was a downright dangerous neighborhood. “It was kind of stupid, really,” says Max now of their decision. “The New York [food] critic at the time said that she was afraid to get out of her taxi.” What a difference a decade makes. By the late ’90s, smelly meatpacking warehouses and noisy clubs had been edged out by cavernous art galleries and high-end couture. La Lunchonette, a quiet, candle-lit space, quickly became a favorite canteen for artists, writers, filmmakers, and the people who support them.

Fraysse, the chef, turns out hearty traditional French fare such as steak au poivre, cassoulet, and rabbit with prunes. Max, a studio art and English major at MHC, comes up with many of the lighter dishes on the menu, such as chestnut and cauliflower soup and a braised leek and marinated lentil salad. She also manages the restaurant and even occasionally waits tables. “Neither of us are professionally trained chefs,” says Max. But Fraysse had the best teacher: his grandmother. New York’s current critic singles out Fraysse’s rabbit with prunes, venison studded with quince, the cassoulet, and his tarte Tatin, calling them “all surefire seductions.” 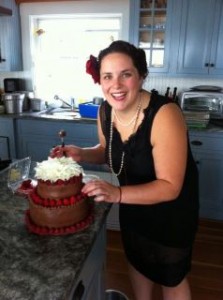 Initially, Chloe Martin had misgivings about her decision to go to MHC. Then her mom told her about the college’s tradition of nightly M&Cs. This small detail made all the difference to the seventeen-year-old, for whom baking was a passion. “Mount Holyoke gets it!” she remembers thinking. A philosophy major, Martin spent a semester in Copenhagen her junior year. The academics were great, but it was the traditional Danish layer cakes sold at La Glace, the city’s oldest bakery, that inspired her to pursue baking as a career. Two years after graduation, she took a job as prep cook at Ula Café, where she’s now the kitchen manager.

Ula Café won “Best Local Coffee Shop” in the Boston Phoenix last year, and it’s easy to see why. Located in the historic Heffenreffer brewery building, the café has exposed brick walls and comfy banquettes—and free Wi-Fi. Regulars come for the popovers (served with butter, Nutella, or peanut butter) and for the roasted sweet-potato sandwich, made with Monterey jack, tahini, avocado, red onions, alfalfa sprouts, tomatoes (in summer; in winter, they are replaced by red bell peppers), and a poppy-yogurt spread. Amongst the panoply of baked goods are chocolate-chip walnut cookies, vanilla-bean cupcakes, éclairs, and French macarons. The coffee is from New Harvest, a small roaster based in Pawtucket, Rhode Island. The woman-owned café is apparently a magnet for MHC alumnae, too. “Susannah Furnish ’04 and Caitlin Reed ’05 founded their law firm at the café. And Bekka Lee ’04 wrote many papers for her master’s in public health and her PhD here,” says Martin. In addition to training new hires, Martin devises new recipes and tweets under the café’s handle: @ulacafe.

Chloe writes: “Ula Café is all the good parts of hanging out in the library, but with great food and in a city setting. We are also a women-owned and operated café with environmentally friendly practices.” 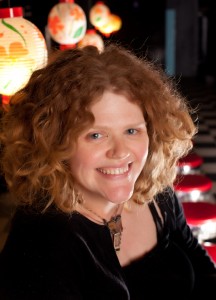 Guadalupe Café, which Jen Pearson opened in 2004, was most certainly the first farm-to-table restaurant in Sylva, North Carolina (population: 2,061). Pearson, a history major who worked in restaurants for eight years after graduation, moved to Sylva because her mom taught at a nearby college. She ended up falling in love with the charming mountain town, snapped up an old drug store on Main Street (complete with antique red vinyl barstools and vintage soda fountain), and began serving up a medley of Caribbean, Latin American, Asian, and even African cuisines—a style she calls “tropical fusion.”

Despite being a small café in an out-of-the-way town (Sylva is forty-five miles west of Asheville), Guadalupe has gotten national press for Pearson’s unpretentious, locally sourced fare. None other than Gourmet magazine reviewed the restaurant, calling her curried goat taco “truly spectacular.” Pearson prizes her relationships with local farmers and ranchers—goat is from nearby Dark Cove Farm; chicken, from Springer Mountain in Georgia; and, especially in summer, most of the produce on the menu is from area farms. Although the menu changes seasonally, you’ll always find tacos and burritos as well as fried plantains, okra spears, grilled greens, and hearty entrées such as jerk chicken. (In summer, though, the jerk chicken is at its best, prepared with local sweet onions and Nardello peppers, thyme, honey, habañeros, and heirloom tomatoes.) There’s even live music: on Tuesday evenings, fiddler Ian Moore leads an old-timey jam. 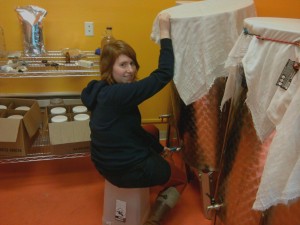 When Amanda Englund graduated from MHC with a degree in Russian studies in 2006, she had never even tried kombucha. Now, the sour fermented tea, made from a symbiotic mass of bacteria and yeast, is the basis of her small business, Lion Heart Kombucha. Englund, who calls kombucha a “magical” beverage for its health benefits and unique taste, started teaching home-brewing classes soon after she moved to Portland in 2008. The popularity of her classes convinced Englund and her husband, Jared, that they should go commercial. (That and the birth of their son, Lev, for whom the company is named.) Using tea from Portland’s Jasmine Pearl tea company and organic, locally sourced ingredients, Englund quickly established herself in the not-uncrowded niche of northwest kombucha-makers in the Northwest. Local grocery chain New Seasons carries Lion Heart, as do dozens of food co-ops, restaurants, and cafés in Oregon and Washington. (For a full list see here.) There are five regular flavors: Lavender Lemonade, Oregon Strawberry, Pomegranate Love, Ginger Fizz, and Hero’s Blend (hibiscus). Seasonal flavors include Douglas Fir Tip, Watermelon, and Blackberry Ginger. (A sixteen-ounce bottle—which you can savor over several days—retails for $3.49.) 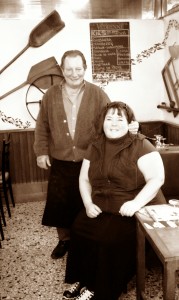 Most Americans who stumble upon Le Monaco, in Paris’s thirteenth arrondissement, are surprised when they hear the owner speaking fluent English—because Le Monaco, owned by Kate Magnere and her husband Joel, is so quintessentially French. A country-style restaurant with yellow-and-white checked curtains and walls painted with olive vines, Le Monaco attracts regulars, most of whom are on a first-name basis. They come for the homey atmosphere and rustic French fare—boeuf bourguignon, pot-au-feu, coquelet au pesto, and confit de canard—at reasonable prices. (Most plats are between €9.50 and €13 each; the lunch special—two courses of your choice—is €12.30.) Magnere, who studied art history and romance languages at MHC, came to Paris for her master’s (which she did on the architecture of the Garnier Opera) and never left. She and Joel bought the restaurant a decade ago and they run it together—while Magnere waits tables, her husband tends the bar. Chef Oliver Garnier ably runs the kitchen. The restaurant is open weekdays for lunch only, from noon to 3 p.m. But you can drop by the bar for a glass of Brouilly or Côtes de Rhône (or anything, really) up until 10 p.m.

Kate writes: “My café-restaurant is in a residential area in the south section of Paris, between Denfert-Rochereau and La Place d’Italie. One wouldn’t think they were in Paris because everything around my restaurant resembles a small village. People come for the familiar and homey atmosphere; it’s very friendly and open.”

Tina Carman, who studied biology and Spanish at MHC, grew up on a coffee farm outside of San Jose, Costa Rica. After graduation, she worked as a park ranger at Grand Teton National Park in Wyoming and spent a year traveling around Europe before returning to Costa Rica to help her parents launch the mail-order side of their coffee business.

Although she eventually took a job in real estate, Carman’s dream was to open a café—especially in Costa Rica, where good coffee is, ironically, scarce. Like many coffee-growing nations, Costa Rica has traditionally exported its best specialty coffees, leaving locals with inferior beans. “The Costa Rican coffee we drank was basically undrinkable,” she laments. “There’s hardly anywhere I’ll drink coffee here.”

That is, until this past December, when Carman and her husband, Oscar, opened a little café in Guardia, a small town in the northern Guanacaste province. The café serves organic, shade-grown coffee from Carman’s parents’ finca (farm). Café Cristina is strategically located a few miles west of the International Airport at Liberia. (It’s also minutes from famous beaches, and right before the turn-off for the Four Seasons.)

Carman hires a professional barista to train her employees in the art of espresso-making—so your espresso will have the perfect crema; your latte just the right mix of milk and foam. You can also order a cup of drip coffee, a French-press pot, and even cold-brewed iced coffee. (The last two are practically unheard of in Costa Rica.) The café’s simple menu consists of soups, sandwiches, paninis, salads, desserts, and even Costa Rican specialties such as gallo pinto (which means “spotted chicken,” though it’s a vegetarian rice and bean dish typically served at breakfast).

There’s been a veritable explosion of food blogging over the past decade. Foodblog.comlists nearly 2,000 food blog sites, from A Blithe Palate to ZenKimchi Korean Food Journal. Bloggers dream of being like Julie Powell, whose Julie/Julia blog project led to a book contract and movie deal, or Molly Wizenberg, whose blog Orangette led to a contract for her 2009 book A Homemade Life.

For aspiring writers, blogs offer a great open platform, where you don’t have to convince any gatekeepers to publish your work. Blogsites like Blogspot and WordPress offer professional-looking design templates; all you have to bring is top-quality food photography (in the food blog world, that bar is set high).

Many amateur blogs suffer from a lack of culinary expertise, or from unprofessional writing quality—too much slang, exclamation points, internet jargon—but Mount Holyoke bloggers tend to come in with a high level of writing ability from the start.

—By Holly A. Hughes ’75, editor since 2000 of the annual Best Food Writing anthology, and author of the travel guide Frommer’s 500 Places for Food and Wine Lovers. She also writes the music blog The Song in My Head Today.

One response to “Alumnae Eateries Profiles”