The Mount Holyoke Archives and Special Collections has in its collection boxes of materials full of accounts that describe the lives of students in the Mount Holyoke classes of 1859 through 1865. Sources include letters, diaries and newspaper articles from The Springfield Republican and The Hampshire Gazette.

In 1912, alumna Ellen C. Parsons, class of 1863, published her recollections of life on campus during the Civil War in The Springfield Republican in 1912. 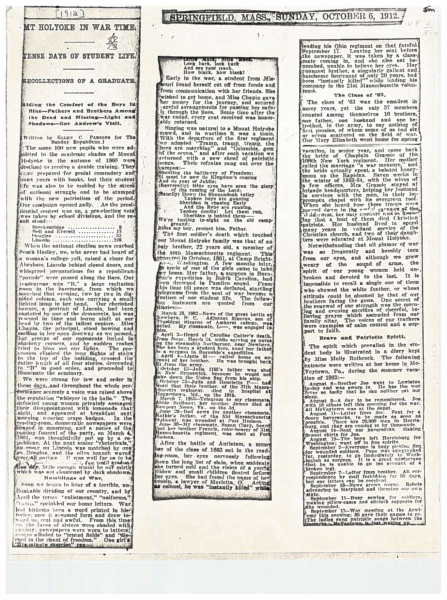 Soldiers in the Family
“The first soldier’s death which touched our Mount Holyoke Family was that of an only brother, 22 years old, a member of the 10th Massachusetts regiment. This occurred in October, 1861, at Camp Bright-[unclear], Washington. A few months later, an uncle of one of the girls came to take her home. Her father, a surgeon in Burnside’s expedition in North Carolina, had been drowned in Pamlico sound. From this time till peace was declared, startling telegrams from the seat of war became a feature of our student life.” 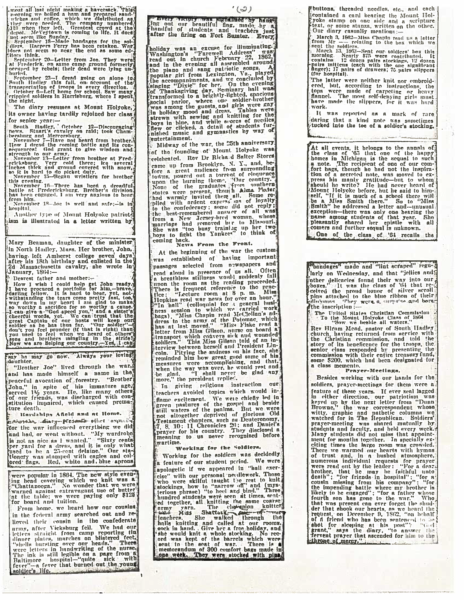 Working for the Soldiers
“Working for the soldiers was decidedly a feature of our student period. We were apologetic if we appeared in “hall exercise” without our personal needlework. Those who were skillful taught the rest to knit stockings, how to “narrow off” and (mysterious phrase) “to heel and bind.” Three hundred students were seen at times, seated together, all knitting the same coarse army yarn. The champion knitter was Miss Shattuck, one of our teachers. She walked through the halls, knitting, and called at our rooms, sock in hand.”

The Bright Side
“Nature was close to us and good to us. We forgot battles as we watched the crimson sun dropping behind Mt. Tom. In couples and groups we picked our pedate violets [sic] on the sandy knoll and found rhodora in dark woods. As girls are wont, we spiced our serious years with mince-pie suppers, with jolly drives, with hours of ease and merriment.”