Amy Pellman ’82: A Voice for Justice 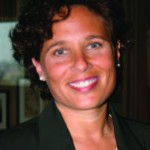 When she was a student at MHC, Amy Pellman ’82 served as president of the Student Government Association. But she discovered her real passion for human rights, and the rights of one fellow alumna in particular, working for Amnesty International in the summer of her junior year.

Iride del Carmen Marasso Beltran de Burgos ’76 was a supporter of Archbishop Oscar Romero, the revered advocate for the region’s poor. She and her husband and son had moved to Guatemala following the archbishop’s assassination in El Salvador. Like millions of her countrymen targeted for their prodemocracy leanings, de Burgos and her son were allegedly abducted, or “disappeared,” by the Guatemalan military in 1981.

Amy got wind of Iride’s situation and made it her personal goal to shed light on the case and the ongoing struggles for freedom in Central America. Back on campus, she circulated petitions, gathered donations for Amnesty International, and worked to bring the atrocities in Guatemala to light through letters and articles.

Tragically, Iride was never found. But almost thirty years later, Amy is still working in the name of justice as a family court judge in the Los Angeles Superior Court, where she spends her days defending the rights of children.

Before assuming her current position, Amy worked as an attorney advocating for foster children and parents in dependency court. She found that the rights of foster children remained a relatively unexplored area of law, and that the lawyers involved in those cases had very little training or information. She developed a training manual.

“Children in foster care have no voice,” Pellman says. “They have been taken away from their family for abuse or neglect, they are vulnerable and extremely underrepresented.”

Amy also served as the legal director for the Alliance for Children’s Rights, which provides legal services for impoverished and abused children. She helped found National Adoption Day, which opens up courtrooms across the country on the Saturday before Thanksgiving to finalize adoption papers and help provide thousands of children with homes.

Today, as a family law judge, Amy handles issues ranging from multimillion-dollar property divisions to custody battles. But she remains focused on the rights of those whose voices, like Iride’s, are often absent.

“My courtroom is child-centered, not parent-centered,” she says. “Children are always the first priority.”—Cass Sanford ’10