Barbara Sutton ‘61: From Onlooker to Hands-on 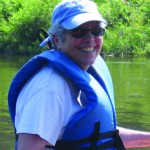 When Barbara Sutton graduated from MHC in 1961, students were a vital part of the civil-rights movement. She still vividly recalls a conversation with an exchange student from a college in Greensboro, North Carolina.

“She was telling us about the lunch counter sit-ins and her plans to go to Mississippi to register voters and I thought, ‘Wow! Look at what you are doing.’”

After graduation, Barbara returned to her hometown of Syracuse, New York, getting an MA, working as a reading specialist, running a reading program, and raising her daughters. And then her own activism kicked in. “I guess I was a late bloomer,” she says.

When a visiting speaker from A Better Chance—an organization offering inner-city students of color a chance to attend high-achieving high schools— spoke about the importance of establishing a wide base for the program, “I remembered reading an article in the Quarterly about MHC hosting a summer orientation program for ABC scholars for a few years in the ’60s. And The Sycamores, where I lived my sophomore year, served as the South Hadley ABC house until the program closed.”

Immediately, Barbara felt “…this was our way to make a difference.” As part of a group that included Pat Seip Lein ’46, Barbara worked to buy a house, raise money, and establish the Fayetteville-Manlius A Better Chance program, which opened to young girls in 1974.

After thirty-six years, four stints as board chair, thousands of “open house” nights at Fayetteville-Manlius High School, and countless college applications, Barbara remains passionate about making a difference in teenagers’ lives. As for “parenting” teens in perpetuity, perspective is everything. “I don’t do this because the girls are going to be appreciative while they’re there. It’s for later; when the alums come back they are warm and loving and so grateful.”—J.S.