Students—perhaps members of the Suffrage League—wear “Votes for Women” sashes and march through campus playing instruments.

How Mount Holyoke women pushed for the vote

“A woman’s college is not generally thought to be the place to go for political excitement,” begins an article from the November 13, 1904, Philadelphia Press newspaper, which goes on to describe an amusing and “elaborate” tradition at Mount Holyoke College: that of mock presidential elections held every four years since just before the Civil War. These elections were a complex affair and included national committees for the running parties, caucuses held in each residence hall, campaign dinners, state conventions, and vibrant political signage displayed around campus. Participating students went to great lengths to accurately play the roles of the vying candidates. 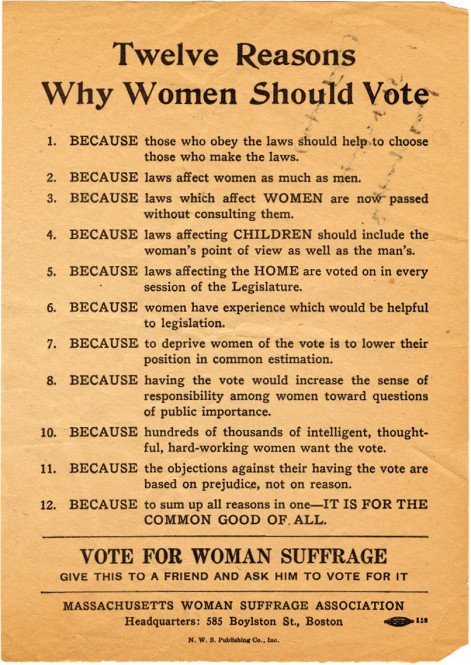 A flyer by the Massachusetts Woman Suffrage Association distributed on campus during Suffrage Day on April 24, 1915, lists twelve reasons why women should be given the right to vote.

This tradition reveals the extent to which Mount Holyoke students yearned for the right to be part of the political process outside of the gates. In a place where young women were encouraged to express their opinions, participate in intellectual debates, and excel in academics every bit as rigorous as those at men’s colleges, the right to vote became more and more important.

In the early 1900s, as the suffrage movement gained momentum, the Faculty Committee passed the constitution of the Mount Holyoke branch of the National College Equal Suffrage League on May 4, 1912. The chapter quickly sent a delegate to the annual council meeting and began to hold lectures on campus. One notable lecture, held in May 1914, featured Caroline Galt, associate professor of archaeology, who stated, “After all ‘arguments’—so-called—against equal suffrage have been met, the old objection is raised, ‘But the majority of women don’t want to vote.’ Looking back in our evolution when education was the passionate goal of women, did Mary Lyon wait to found her seminary till all women wanted to go to college?”

By 1915, the membership of the Suffrage League numbered 350 students, nearly 45 percent of the student body. That same year, the student organization held “Suffrage Day,” during which students protested, held debates, and distributed pro-suffrage literature. Yet, it would be five more years before the first women would cast their votes in a presidential campaign after the Nineteenth Amendment was ratified on August 18, 1920.