Business is Buzzing at Beehive Sewing 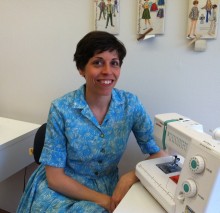 Tess Poe ‘97 has on a collared dress printed with bright blue daisies and accented with vintage-looking green buttons.  She did not make it herself.

“But I could’ve!”  Poe assures.  When you run your own pay-by-the-hour sewing studio, it’s a question that you’re often asked.

Poe and husband Carson opened Beehive Sewing in downtown Northampton last August.  The studio, located on Pleasant Street, offers different rates based on which equipment customers want to use, provides a range of classes and guided studio direction, and even hosts private events.

“A lot of people have a lot of assumptions about who they think comes in here, and they re usually not quite right,” informs Poe.  Since opening, Beehive Studio has had 250 customers, and “it’s really across the board in terms of age, gender, [and] types of projects.”  Patrons range from a man who worked on a canvas holder for wrenches and chisels to a woman eight months pregnant who, while the building was undergoing renovations, “crawl[ed] under caution tape and plastic sheeting because she had to sew,” Poe laughs.

The couple did extensive research before opening.  “When you’re an entrepreneurial person, [you’d] rather find data about spending habits and demographics and stuff than watch TV,” she says of their efforts.  Future goals include opening more studios and helping other textile-based businesses get established.  For Poe, “to do something that has a community focus and that is service oriented…that’s all really important.”

“The other goal was to be able to do more sewing,” she laughs.  “I have to remind myself to take the time to do that.”  Though it’s a challenge to be responsible for everything (marketing, finance, strategy…and cleaning the bathroom), Poe knows that most businesses’ first years are that way. Luckily, she learned some relaxation techniques during her time at Mount Holyoke: “No matter how busy we all were, every Friday at four o’clock, we all had tea…You have to schedule that downtime.  Even during finals and during reading days.  We just did it, and it was worth it.”

2 responses to “Business is Buzzing at Beehive Sewing”