As Lynn Pasquerella ’80 prepares to take her leadership skills to the national stage, we look back at her successes as Mount Holyoke’s eighteenth president 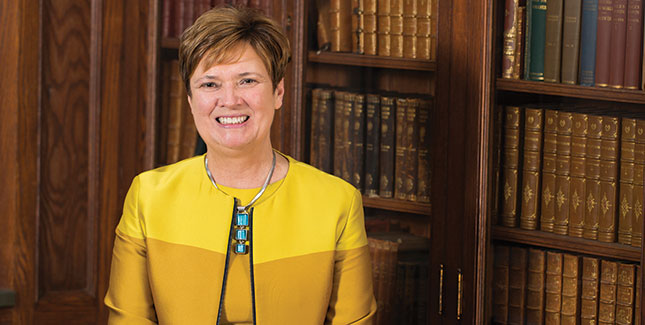 “There’s no other job that could take me away from this place,” President Lynn Pasquerella ’80 said before an audience of Mount Holyoke faculty and staff in early January. The previous day Pasquerella had informed the community that, effective June 30, 2016, she’d be stepping down as Mount Holyoke’s eighteenth president to take on a new presidency with the Association of American Colleges and Universities (AAC&U), the foremost national public-advocacy organization concerned with promoting the value of undergraduate liberal education.

Calling Mount Holyoke “an institution that transformed my life,” Pasquerella spoke to the importance of championing what Mount Holyoke and its peer institutions offer on a national level. In a letter to the community, she promised that South Hadley would never be far from her heart in her new role, and that as an alumna of the College she would always be “a zealous advocate for Mount Holyoke’s mission of directing liberal learning toward purposeful engagement in the world while fostering the next generation of women leaders.”

During her tenure Lynn sought out new ways to improve the educational experience of our students while eloquently advocating in local, national, and international forums for the high academic standards that are the hallmark of Mount Holyoke.

Barbara McLearn Baumann ’77, Chair of the Board of Trustees

Known to students and alumnae as “Commish,” Pasquerella’s time at Mount Holyoke is marked by her deep commitment to creating a vibrant community and making herself accessible to those on and off campus: co-teaching a course almost every semester of her presidency, tweeting on a regular basis under the handle @commish1837, hosting events for students in her home, and personally answering every email and letter from alumnae.

“President Pasquerella is always willing to engage with and participate in conversations with students,” says Carly Bidner ’16, chair of the student senate. “She is an active presence on campus and has worked to make the president’s office accessible to all of us.”

The theme of accessibility runs strong through Pasquerella’s presidency, most notably in her efforts to put a liberal arts education within reach of all students. In the summer of 2014, after attending a summit at the White House on the cost of higher education, Pasquerella announced that going forward Frances Perkins (FP) Scholars—students of nontraditional age—admitted to the College would be eligible for full tuition scholarships.

Pasquerella also ensured that every student had access to experiences beyond campus that would support their work in the classroom through the Lynk, a bold initiative that guarantees a paid internship for every student and connects curriculum to career in a forward-facing way that readies students for the rapidly changing world that awaits.

Then, in 2014 Pasquerella announced a new admission policy that allows transgender students to apply to the College. Mount Holyoke was the second women’s college in the country to implement such a policy, which remains one of the most inclusive to this day.

President Pasquerella’s time in office coincided with a dramatic economic downturn in the US and around the world. During these uncertain years, Pasquerella turned her attention toward positioning the College for long-term financial sustainability. Despite the global recession, she was instrumental in leading a successful $305.4 million campaign, which concluded in June 2013. Under Pasquerella’s leadership the College endowment grew from $520 million to more than $717 million.

Pasquerella focused not only on strengthening the College’s financial position but on its place within the larger context of intellectual debate at both the local and national level. In a January 2016 article, the Daily Hampshire Gazette called President Pasquerella “a highly public leader of a private college in ways that deserve to be emulated,” noting her many op-ed pieces in publications around the country and the regular radio and television segments she hosts featuring researchers and faculty discussing important issues of the day. A philosopher and scholar, Pasquerella has written extensively on medical ethics, theoretical and applied ethics, metaphysics, public policy, and the philosophy of law.

During her tenure President Pasquerella led Mount Holyoke through a time of transformative growth, positioning the College to succeed in an increasingly competitive higher education landscape.

Here’s a look at just a few of her achievements:

Increased endowment from $520 million to $717 million

Launched the Lynk initiative in 2014. More than 750 paid internships granted to students in the US and abroad

In 2011 introduced Professional and Graduate Education program extending the reach of a  Mount Holyoke education through degree programs, certifications and professional development

In her new role, Pasquerella will take on the broader challenge of championing the liberal arts. Her appointment as president of AAC&U is testimony to the power of a Mount Holyoke education. In fact, she will succeed sister Mount Holyoke alumna Carol Geary Schneider ’67. Founded in 1915, AAC&U now comprises more than 1,300 member institutions and works to help colleges and universities keep the quality of student learning at the core of their work as they evolve to meet twenty-first-century economic and social challenges.

In her first words to the alumnae community in the fall 2010 Alumnae Quarterly, Pasquerella wrote, “In every case the liberal education we have received at Mount Holyoke has empowered us to thrive in an increasingly complex global society and to respect the narratives and experiences of those different from ourselves. It is the richness of what Mount Holyoke has to offer to the world, through its alumnae, that makes it such an honor and privilege for me to serve as the College’s president.”

“Lynn has been very committed to getting to know her fellow alumnae,” says Alumnae Association Board President Marcia Brumit Kropf ’67. “She meets with alumnae during on-campus events and whenever she travels outside of South Hadley.  She worked closely with the Association to create opportunities for alumnae to learn more about the current state of the College and to share their concerns and recommendations related to the College’s strategic planning process through open-forum discussions and live webcasts. It has been my privilege to work with her.”

When Pasquerella announced her resignation, community members on campus and alumnae across the globe reacted with sadness but expressed excitement that she would continue to advocate for institutions such as Mount Holyoke on a national stage and to promote the value of a liberal education and the expanding role of women in a global society.