Then and Now: Phones on Campus 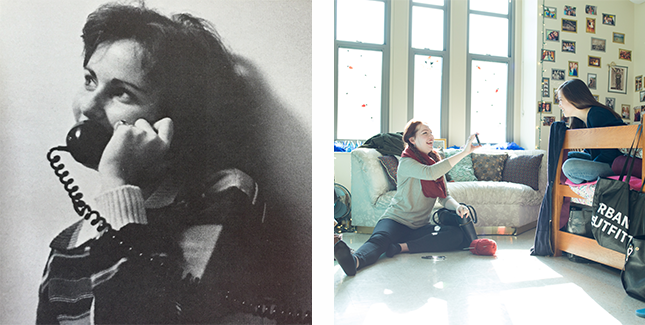 As a Mount Holyoke senior, Nancy Bellows Perez ’76 (pictured above, left) was a substitute teacher. On the days that she was called in to teach, the phone would ring at 5:45 a.m., on the third-floor hallway of Abbey Hall.

“I was hated by everyone on the floor,” says Perez, currently interim executive director of the Alumnae Association. “I was the heaviest sleeper. Someone would have to answer the phone and then pound on my door to wake me up.”

While students were permitted phones in their rooms as early as 1972, most relied on the hall phones—still with a dial and a long, curly cord. Incoming calls were answered by any nearby student—putting a burden on the student whose dorm room was closest to the phone. And if the person being called wasn’t available, whoever answered the phone would leave a message on a piece of paper and tack it to a bulletin board on her door—a necessity of the times.

Outgoing calls had to be made collect, an expense greater than an incoming call. Many students had tricks to call home collect to themselves so that their parents knew to hang up and call them right back.

Privacy was also an issue. “We heard people fight with their parents and break up with their boyfriends,” says Perez. And whether or not their conversations were of a private nature, residents were also reminded to keep their voices down, especially during “quiet hours”—after 11:00 p.m. or before 9:00 a.m.

Today, most students carry Smartphones with them everywhere they go and rely on apps as they navigate through their days. On a typical morning, students grab their phones before getting out of bed, even relying on the alarm clock function to be sure they wake in time for class. They scroll through Facebook and turn on Spotify, listening to their favorite playlists as they get ready for class.

Before meal times, students use group messages to gather friends to a dining hall. During campus events, they take photos of memorable moments—sometimes their performing friends, and sometimes renowned speakers. At Kendall, during a workout, some students hop on a treadmill or elliptical machine and tune in to their favorite Netflix series.

In the library, phones can be a nightmare for procrastinators. Students who plan to use their phones as reference tools or to listen to class-required recordings often find themselves instead on social media. Many resort to apps that can block certain websites for a time to force them to focus. But even during finals, study tables are often crowded with coffee cups, Red Bulls . . . and cell phones.

Despite the ubiquity of phones on campus, rings and beeps in classes attract annoyed eyes. That’s why students aren’t allowed to use their phones during class time. Occasionally, a professor’s phone will chime, however, eliciting smiles from the students.

3 responses to “Then and Now: Phones on Campus”