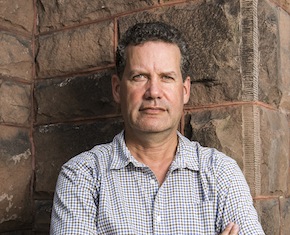 What do you do as interim dean of faculty?

Anything and everything having to do with the lives and careers of faculty members. So, it’s an immensely complex job even in the simplest and easiest of budgetary times. Faculty are an enormously complicated and rewarding group of human beings. They have very different needs among themselves. And it’s our responsibility to our students to provide the strongest faculty that we’re capable of offering to them in the classroom. So, a dean’s job is to make sure that our classes are well taught, that our students are well mentored, that our faculty are productive as scholars and effective as teachers. The dean of faculty presides over an enormous amount of hiring and assessment of faculty and mentoring and advising of faculty, so it’s a job that combines a lot of different kinds of thinking. You are a friend and a colleague and an adviser and a financial adviser and many, many other things.

Your new book, Red Brick, Black Mountain, White Clay, is usually described as a “family memoir,” but you told one interviewer that you don’t know if it’s a memoir. If it’s not, what is it?

A loose and baggy memoir, to borrow Henry James’ adjective for the novel. I wanted a flexible, open-ended kind of book where I didn’t feel artificial borders getting in the way of what I wanted to say. It certainly started out in my own mind as some kind of memoir, and so I honored that sense of its origins, but I also know that I allowed myself to be a critic, an art historian, a researcher, a historian. There’s even some of my own poetry in the book. And I guess my gut feeling was, ‘Why not write in all of the modes I care about? Why not try to get the subject fully told in whatever way it needed to be told?’ I like genres, but I think of genres as being more invitations than pigeonholes or boxes you have to squeeze into. So I heard the memoir invitation, I heard the poetry invitation, I heard the cultural-historian invitation. The reviews that have pleased me most are those that have said, ‘This takes memoir in an exciting direction.’ ‘This is a memoir that has more hard edges.’ Or, ‘This is a memoir that crosses boundaries.’ I like that characterization of the book—that it’s not a safe memoir. I wanted it to be risk taking. I wanted it to feel like I put something on the line, that I’d written a very personal and daring book, and that I was daring readers but daring myself first of all.

Do you agree with the critic who, in praising your book, called most other memoirs “mush”?

Yeah, I do. Henry James said he avoided the first person because it was the ‘last abyss of romance.’ I think it’s true that the first person has a way of turning into mush and self-indulgence, and for me the way [Red Brick, Black Mountain, White Clay] is built around things—pots, bricks, photographs, periodic tables, and so on—keeps it honest, keeps it from drowning in subjectivity and me-me-me-ism.

What did you learn about yourself by writing the book?

I think that one of the deepest messages in the book is how serendipitous the course of our lives turns out to be, how precarious our arrangements in life are. So, for me, the repeated surprise in researching, remembering, and writing the book was that continuing sense that things could have been so different. What if my mother’s first fiancé had not drowned, then what? No book, no me. What if Hitler had not kicked all the Jews out of Germany? My father would’ve never met my mother. So much of the book is built around accidents, coincidences, happenstances, meanders, sort of journeys gone wrong. And at a certain point you begin to think, ‘Well, how much of life is planned, and how much of life is just a roll of the dice?’ And I wanted to give that feel to things. I think that’s just such an open question for all of us as we live our lives.

What’s next for you?

Another loose and baggy book that centers around [Rudyard] Kipling’s Jungle Books. Kipling lived in Brattleboro [Vermont] for several years in the Gilded Age and during the 1890s. He married a Brattleboro woman, and he wrote The Jungle Books in Vermont. I’ve been thinking a lot about birth mothers and adoptive mothers. Why is it that Mowgli being adopted by wolves seems like a really good thing, but when he’s kidnapped by monkeys it seems a really bad thing? When Mowgli is staying with his birth mother he feels this sort of licking at his ankles and he looks down and says, ‘Mother, what are you doing here?’ And it’s Mother Wolf, and she says, ‘I wanted to see this human mother who is feeding you milk.’ And then she says, ‘I fed you milk first.’ And Mowgli, Kipling tells us, had a very complicated and strange feeling in his breast. It has deep interest for me. I’m not adopted, I want to hasten to say, but my family did adopt a sibling to me, a sister. I think adoption is a huge issue, and it has various metaphorical resonances. What is authenticity? What is original? What is hybrid? Is that really part of your culture, or is it an add-on?