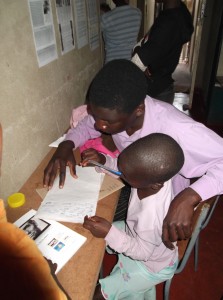 When I glanced at a toddler standing by the side of the road with a tiny pink Mount Holyoke College T-shirt on, I did a double-take. It was still morning but the strong African sun had already burned off most of the night chill. It was late last July and Elizabeth Berges ’94 and I were walking along a buzzing main street in Norton, Zimbabwe. We were nearly 8,000 miles from it, but here was this compact, powerful flash of South Hadley. I came to learn how closely linked the two—our alumnae and this stricken suburb of Harare—actually are.

It was my first time in Zimbabwe but Berges is a regular. She and Arden O’Donnell ’97 founded Coalition for Courage (C4C) eight years ago, to support vulnerable children in the region. Working with a local non-governmental organization, they sponsor scholars from pre-school through high school and beyond, financing school fees and uniforms, stocking a library, funding food security and teaching vocational skills.

By investing in these bright children with shy smiles and deep wells of desire in their eyes, C4C focuses on a groups that’s been lost amidst global revulsion at their nation’s tyrannical regime. During his 30-year reign, President Robert Mugabe has left widespread collateral damage in his wake. Several years ago, the economy virtually collapsed, taking with it the educational, health and agricultural systems that were once the envy of Zim’s neighbors.

Some staggering statistics represent the profound tears in its once-vibrant fabric: roughly 1.3 million, or one-fifth of all Zimbabwean kids, have lost at least one parent, most of whom died of AIDS. A solid quarter of the population is HIV-positive, and more than half of all new infections are among young people. Most of these are girls, largely because prostitution puts food on the table. This pandemic, compounded by political instability and poverty (more than half the population lives on less than $1 per day and the unemployment rate is somewhere between 70 and 80 percent) makes children, in particular, susceptible to exploitation and abuse. Zimbabwe gets the lowest donor support of any southern African nation for people living with HIV; $4 per person annually; compared to its neighbor Zambia, which receives $184 per person, per year.

But, while the global community stepped back, C4C and a remarkable number of MHC alums, stepped forward.

Berges and O’Donnell started C4C, in part, because when they returned from living there several years ago, they found that the hundreds of people who’d been getting their emailed dispatches from Norton were eager for updates on the kids. “I thought it strange at first because these people hadn’t even met them, hadn’t heard their laughter, hadn’t been there when their parents died,” says Berges. They hadn’t witnessed children sleeping on cold dirt floors sharing a blanket with siblings, crowding around one textbook with 20 others in class, or playing soccer in bare feet so they didn’t ruin the one pair of shoes they preserve for school. They hadn’t seen any of this firsthand, yet they cared.

For O’Donnell, founding C4C was also intensely personal. After her father died of AIDS in 1999, she got a master’s degree in public health and requested a field placement at an orphan care center with kids who had lost their parents to HIV. “Losing my dad was so hard, I felt lost and alone,” she says. After spending six months in Norton, O’Donnell says, “I fell in love with the place.”

Alongside the tangible support, of school fees and the like, is a more abstract commodity that C4C gives kids: someone who believes in them. “They helped me realize my potential and significance in the world by their support and kindness,” says Jane Mugovi, who was a C4C scholar from sixth grade until she entered college. She is now a sophomore at Mount Holyoke. Mugovi lost both parents before she was 16 but, when searching for role models, she found confident, determined ‘MoHos,’ (as she calls us) all around her. In the essay that got her into MHC, she wrote, “In my view these women believe in the supreme worth of any individual … After learning they were all Mount Holyoke graduates, I knew that I wanted to be part of the community where they learned.”

The MHC/C4C circle is a wide one; some are generous donors with a deep connection maintained through letters, and others have been fortunate enough to have endured sporadic electricity, no running water and the biggest, creepiest spiders I’ve ever shuddered at, to meet some of Norton’s most clever kids.

Bethany Sager ’96 has sent the proceeds of her elementary school’s hunger awareness banquet to C4C for many years—a contribution which has grown from $700 to $7,000 in the past decade. She visited Norton in 2007 and was wonderstruck by the experience. “The children we worked with had such happiness in their hearts,” she says. One of Sager’s fifth-grade students was so inspired that, after raising money for two years, he hand-delivered soccer uniforms and balls to Norton.

Bridget McBride ’94 is a registered nurse, but it was a basic knowledge of sewing that helped her make a lasting impact during a two-week visit to Norton in 2010. She spearheaded the “Real Pads for Real Women” project and taught an entrepreneurial group of girls to make durable, reusable sanitary pads (disposable ones are prohibitively expensive there). The girls are now selling their product and reinvesting their profits. The pads project is part of C4C’s on-going goal to help kids become sustainable adults with safe and healthy work through skills-building.

When asked why MHC women gravitate toward C4C’s work, she says, “Our time at MHC remains special in our hearts because it represents our first taste of the potential for powerful change both as individuals and a group,” and C4C is a chance to effect that change.

While they’ll admit to, at times, feeling frustrated and hopeless at the sheer scope of their undertaking (O’Donnell says working in Zimbabwe can be like “doing social work on the Titanic”) they can’t imagine quitting. “I deeply believe in the resiliency of children and…I am inspired by their will to succeed despite the circumstances of their lives,” says O’Donnell.

Like the MHC women before me, I think often about those little ones who flocked around this summer, under the intense African sun, to hear me read. They’d sit on my lap, hold my hand or sit just close enough to pinch my shirtsleeves. I smile thinking about the pre-schoolers who eagerly showed off their burgeoning English skills. “HowAreYouI’mFine! HowAreYouI’mFine!” they’d shout as Liz or I passed their playground several times a day. My heart is also heavy recalling their burdens, their memories of losing a parent or a sibling, or of sexual abuse suffered.

It’s hard to say why so many Mount Holyoke women are connected to Norton. It may be that we learned long ago on that dynamic campus that we’re not defined by what separates us—be it thousands of miles or oceans of opportunity—but instead by what unites us. A smile, a shoulder to cry on, an aspiration, a need to be acknowledged; these are the pieces of our shared humanity.