Eesha Pandit ’03: One Piece of the Human Rights Pie 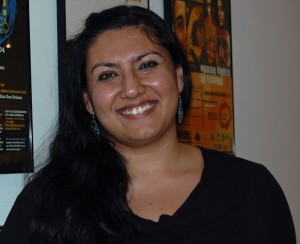 Every person working for universal human rights would love to know the secret to successfully changing dated attitudes and cultural practices and bring into the conversation voices that have traditionally been ignored.

Eesha Pandit hasn’t found a magic solution to these issues, but is enthusiastic about the innovative approach her organization is taking to promote equity and justice here and abroad.

As women’s rights manager at Breakthrough, a global human rights group with offices in New York City and New Delhi, India, Eesha is working on a campaign to help end domestic violence against women via media arts and an innovative call to action called Ring the Bell.

Introduced by the group’s branch in India, the awareness and advocacy campaign aims to get men and boys who hear the sounds of domestic violence in their neighborhood to ring the doorbell at the offender’s house, and ask the person at the door a question unrelated to the incident.

“That intervention stops the violence in that moment,” says Eesha. “It’s a chance [for the woman] to escape. It demonstrates community accountability. It also makes clear that they’ve heard [the abuse] and empowers men and boys to take that seriously.”

The overall results have been positive, she says. More women contacted domestic violence shelters, and a national conversation has developed about stereotypes and human rights. Eesha is now researching what elements of the Indian campaign will translate well to the US.

Breakthrough’s effort to build awareness of women’s and immigrants’ rights, HIV/AIDS, and racial justice by meeting people “where they are” with music videos, Facebook games, and soap opera characters is the brainchild of Mallika Dutt ’83.

Eesha, who heard Mallika speak when she was in college, worked at numerous human rights organizations before going to Breakthrough. She says, “We think of ourselves as part of a broader movement, and our piece of the pie is using culture to change culture.”