Comedian Jessica Inserra ’98 on her return to the stage 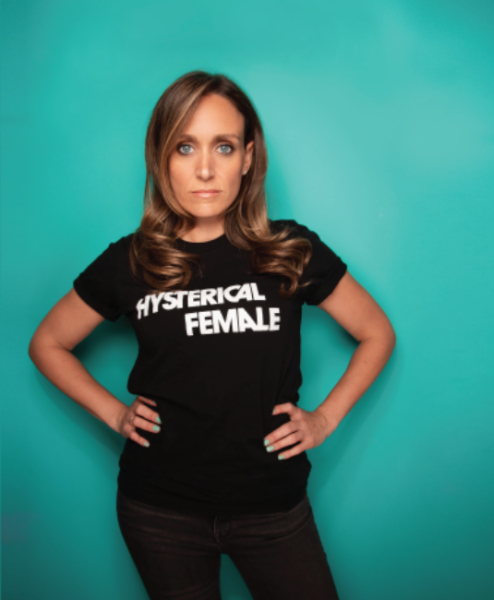 “Can you imagine the masochism involved in being like, ‘Okay, I am going to get up there and expose my soul, try to make you people laugh,’ with the distinct risk that they won’t?” says comedian Jessica Inserra ’98, who faces this question sometimes on a nightly basis before taking the stage in front of an audience who may or may not be there to see her, specifically.

“Comedy is kind of the great equalizer,” says Inserra. In playing a number of venues, she has met both newbies and performers with far more experience and success. Comedians Jim Gaffigan and Bill Burr dropped in on one of her shows during the summer, and over the past year she has met others backstage, including Andrew Dice Clay.

Almost everything about the work of performing stand-up has the risk of putting the comedian in a position of feeling vulnerable and alone. Some nights are harder than others, and the audience response isn’t what’s hoped for. But, Inserra lives for that moment when she’s truly connecting with the audience.

“You know when it happens,” she says. “It’s amazing when you know you’ve achieved those moments when you were not in your head while you’re delivering the line. You’re not listening to yourself and judging yourself. You’re really just performing for the audience, with the audience, connecting with them. Something about that moment frees up your instrument. You’re just 100% present, 100% connected. There is nothing like that in the world.”

In 2005 Inserra moved to Los Angeles to pursue acting but instead was recruited to help set up a fledgling plastic surgery office, where she began as the sole employee and now leads a large team and has the flexibility to give to her creative passion. After taking off more than 10 years from the stage, she says, “I missed performing.”

“Comedy is not a team sport. … It’s you and your material. You sink or swim on your own on the stage.”

About a year ago, with the encouragement of a friend, Inserra auditioned to take a comedy class with comedian and teacher Gerry Katzman. After writing jokes as a form of an audition and sending them to Katzman, Inserra then had a phone interview with him. “He puts you through the paces to get into this class,” she says. “I think he wants to weed out the people who are not really serious. … It is not for the faint of heart.”

Week after week, Inserra attended the four-and-a-half-hour-long class, writing jokes in the days leading up to the classes and practicing the material in front of the other students. “I probably almost quit the class every week for two and a half months. I would go to the class and sit outside in my car and think, ‘What am I doing? I can’t do this. This is crazy. Nobody wants to hear what some aging lesbian’s point of view is.’”

But she persisted, and the class culminated in a comedy showcase. The host, who produces a regular show at The Comedy Store, a comedy club in West Hollywood, liked her work and invited her to perform. “As they say,” Inserra says, “the rest is history. That was my first opportunity, and I have continued.”

Her schedule has gotten exponentially busier with festivals, shows and out-of-town gigs. In July Inserra happened to be in NYC for a series of shows when NBC’s nationwide stand-up talent search auditions were taking place. She attended the open call, was asked to return and made the semifinals, where she was scouted by a top agency.

Inserra credits women, people of color and LGBTQ people working in comedy for paving the way to a more accepting atmosphere on the comedy circuit. “I wholly embrace … being a woman over 40, being a gay woman. Things that used to be a disadvantage are now considered an advantage. You’d be foolish in my opinion not to exploit what makes you uniquely you.”

Learn more about Inserra, including upcoming shows, on Instagram
@jessinserra or at prettygay.net.

This article appeared as “Riding the Laughter” in the fall 2019 issue of the Alumnae Quarterly.

Are you an artist?
Email your submission to us at quarterly@mtholyoke.edu.