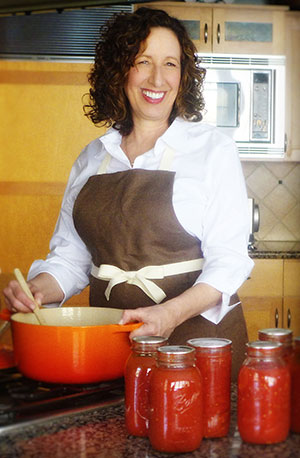 Spring and summer are busy seasons for Cathy Barrow ’78, author of the popular food blog Mrs. Wheelbarrow’s Kitchen and forthcoming cookbook MRS. WHEELBARROW’S PRACTICAL PANTRY: Recipes and Techniques for Year-Round Preserving (W.W. Norton & Company; November 2014). An ardent supporter of the local food movement and sustainability practices, Barrow spends a great deal of time at farmers’ markets near her home in Washington, DC, stocking up on fresh produce, meat, fish, and dairy. Through many weekends spent canning, preserving, curing, and pickling, Barrow creates her own practical pantry—an abundant store of goods in her own home, lined with hundreds of jars of crushed tomatoes, jams, beans, and stocks—that will carry her through the long winter months.

Barrow’s debut cookbook arms readers with tools, knowledge, and confidence to help them start their own pantries. The pages are filled with detailed photographs, comprehensive tutorials, and mouth-watering recipes for using the food you preserve.

Barrow is a regular contributor to the New York Times, and writes the twice-monthly “Canning Class” column for the Washington Post. She has also written for Food52, Garden and Gun, and Southern Living. She lives in Washington, DC, with her husband, two Schnauzers, and one all-white cat. A few months before the book launched, Barrow spoke with the Alumnae Association about her work and upcoming cookbook.

We all want to eat green and live sustainably, but it’s hard to figure out how to do that in a personal way that might make a difference
Cathy Barrow ’78

On why she cans and preserves her own food:

I read Barbara Kingsolver’s Animal, Vegetable, Miracle, which chronicled her family’s efforts to “live locally,” and it really resonated with me. We all want to eat green and live sustainably, but it’s hard to figure out how to do that in a personal way that might make a difference. Having those jars of food that I canned readily available in my pantry was huge—a real turning point for me.

On learning to can:

I canned with my great-grandmother, whose son had a farm. I spent the summer with her, standing next to her at the stove on a stool, and he’d drop off big bushels of food for us to can. I also canned with my mother, who had a country home in the Berkshires—we loved to make jam together. These memories were locked deep in my brain, but after reading Kingsolver’s book, I remembered all those experiences and drew the connection between home canning and local eating. From there, I developed relationships with farmers at local markets and devoured books on the subject to further my preserving education. We all start by making jam or pickles, but you can only consume so much of that until you learn to do something else. I began to experiment with curing my own meat and making my own cheese and learning to cook intentionally with the things I had preserved instead of stocking my pantry with items I would never use. 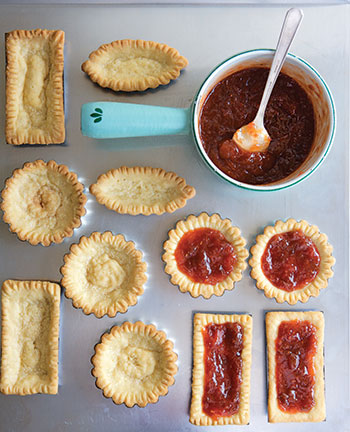 On writing a cookbook:

I didn’t start my blog as a road to a cookbook. While blogging, I began to notice a specific interest in preserving, so it grew organically into that arena. As my audience grew, I received greater feedback. I then met a wonderful agent in New York who was very encouraging, but I played cat-and-mouse with the whole idea; I wasn’t rushing into a book deal. It took about two years to put the book proposal together. I was fortunate that Norton picked it up, and my editor, Maria Guarnaschelli, shook it up and reorganized it in so many smart ways.

It took me thirteen months to actually write the book. It was one of the hardest things I’ve ever done and required so much discipline and organization. The photographers, Christopher Hirsheimer and Melissa Hamilton of the Canal House Cooking series, were clear they did not want to shoot a book of jars. They wanted to capture the fleeting abundance of seasonal food; the feeling of being inspired by something beautiful at the market and the desire to preserve it so you can enjoy it longer.

» View a recipe for jam tarts from Barrow's new cookbook

1. In the bowl of a stand mixer fitted with the paddle attachment, or in a large bowl, using a hand mixer, beat the butter and sugar until light and creamy. Add the egg yolk and blend until combined. Add the flour and salt and blend until combined. Turn out the dough, gather it together, and form into a disk. Keep covered with a slightly dampened towel as you work.
2. If making tiny tarts, set out twelve 1-by-2-inch molds. Pinch off pieces of dough the size of a walnut and press one into each mold. Place the mold(s) on a baking sheet. Alternatively, press the dough over the bottom and up the sides of a 9-inch tart pan with a removable bottom. Chill the crust for 30 minutes.
3. Preheat the oven to 350°F.
4. Prick the crust all over with a fork. This will keep the crust from ballooning up in the oven, although it still may rise a bit; don’t worry, it will go back down. Bake tartlets for 8 to 12 minutes, 15 to 20 minutes if using a tart pan, until the crust is very lightly browned, about the color of sand. Watch carefully and do not over-bake. Remove to a rack and cool completely.
5. Using a toothpick, carefully release the tiny tart shells from the pans; or, remove the large tart shell from its pan. Warm the jam in a small saucepan and spoon it into the baked shells. Let the tarts cool before serving.

Jam tarts are best when enjoyed within 3 days.

On what the future has in store:

I never intended to do any of this; it’s all a surprise! I’m really lucky to have a whole new career and opportunity at this age. It’s hard but feels really good. I have an exciting book tour planned. Over the next four months, I’ll be visiting twelve cities including, Washington, DC, New York City, San Francisco, and Seattle. I am also currently working on a proposal for a second book.

» Read the feature article, “A Scholarly Feast”, from the fall 2014 Alumnae Quarterly.