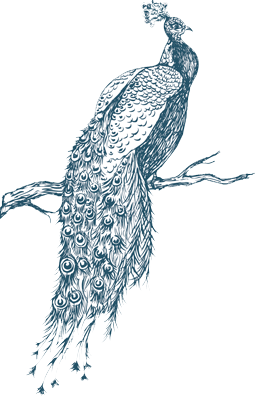 Culinary historian Barbara Ketcham  Wheaton ’53 turns to cookbooks to learn about the past.

“Ladies and gentlemen,” announced Barbara Ketcham Wheaton ’53, addressing the twenty occupants of a staid conference room at the Radcliffe Institute’s Schlesinger Library, “I have been asked to tell you how to cook a peacock.”

It was a reasonable request. Wheaton, a pioneer in the relatively new field of culinary history, had once prepared a peacock for 150 people attending a Harvard banquet, an event that imagined a fifteenth-century feast at the court of Charles the Bold, Duke of Burgundy. This past June, in a tone combining seriousness of purpose with wit and zest, Wheaton recounted the experience to students in her weeklong annual seminar on reading historic cookbooks. “The first thing you have to do,” she explained, “is persuade some other person to find a peacock and make sure it still has all its feathers on it.”

Wheaton’s peacock, frozen solid, came to her home in Concord, Massachusetts, from Middletown, Connecticut, where, she was told, the owner of a nursing home raised fancy fowl. She skinned and roasted the bird, then used linen thread to stitch it back together, feathers and all. She constructed a wire armature to hold up its neck and affixed gold leaf to its eyelids and beak. Wheaton declared the peacock “the ultimate party dish” for frugal cooks who want to make an impression: “It tasted like old pheasant: very tough, a little bit rank. There were plenty of leftovers.” 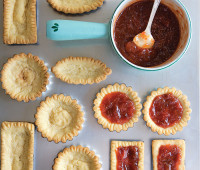 Wheaton’s culinary venture is emblematic of her unconventional path as a scholar—one dedicated to exploring a source of knowledge that researchers had long overlooked: historic cookbooks. “They are the voices of people whose normal speech rarely got written down at least until the nineteenth-century, and that means men as well as women,” she says. “These were not people with much status; they were housewives, people in domestic service. Writing cookbooks was not considered a glamorous occupation.”

Today, these books provide a window into the past. If you know how to read them, Wheaton says, you can find information about a culture—from its beliefs about health to its religious practices to its technological innovations—that is unavailable anywhere else. “People say, ‘It’s just a cookbook. It tells you to do something.’ But the author also reveals things about his or her time and place unintentionally. They’re fun to decode,”  Wheaton says.

No one’s going to cook that turtle soup, but they’ll read about it, and it will make their world a little more romantic.
—Barbara Ketcham Wheaton ’53

“I think cookbooks really do touch on people’s lives—on their imaginations and on their hopes and fears,” she says. “They are so full of desperate practicality and, on the other hand, all kinds of imaginative stuff. No one’s going to cook that turtle soup, but they’ll read about it, and it will make their world a little more romantic.”In the cookbooks she’s read, Wheaton has come across recipes for a medicine to cure the bite of a mad dog and for a poison to spread around the edges of a room to keep away insects. She has found recipes adapted to accommodate the privations of wartime, including the rationing of ingredients during World War II. She has encountered descriptions of elaborate tabletop ornaments fashioned from sugar, instructions for a pie that releases live birds when the crust is lifted (the birds are slipped into the pie through a hole in the bottom just before serving), and numerous recipes for turtle soup, despite the fact that this popular nineteenth-century delicacy was rarely attempted by home cooks.

In recognition of her scholarship, Wheaton received the 2013 Roget Award, a lifetime achievement award in the cookbook world. Yet she never set out to study culinary history; in fact, it didn’t exist as a discipline when she was young. At Mount Holyoke she majored in art history—an interest that arose partly from growing up in a museum-going family and in a home filled with paintings. “I like to look at things in the natural world as well as in the made world,” says Wheaton, who would ultimately regard cooking as an art, too.

At the recommendation of her advisor at Mount Holyoke, who thought it would be good preparation for graduate school, Wheaton also studied German for two years. The classes, taught by Erika Meyer and Edith Runge, met three times a week in addition to twice-weekly conversation sessions. They would prove invaluable when Wheaton began studying cookbooks. “I’ve been thankful for them ever since because it made learning Dutch easier and because I’ve used German in my research.” 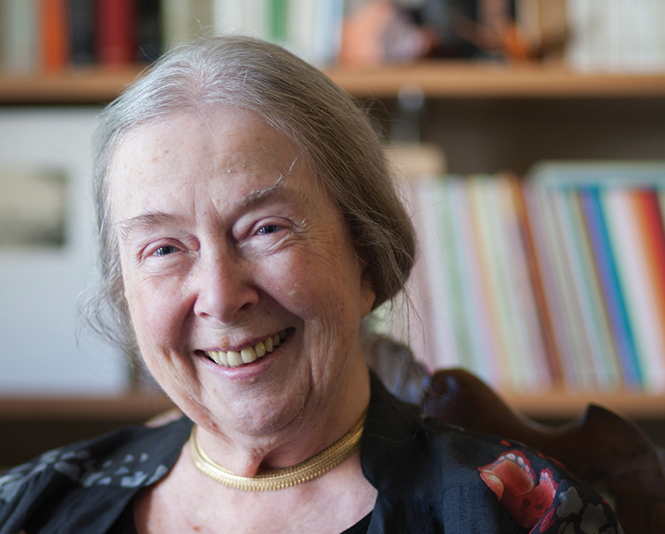 While her language classes gave her practical skills, a geography course she took as a sophomore influenced her thinking more deeply. Taught by Minnie Lemaire, it encouraged her to consider how environment affects societies, causing events to unfold differently in one place than in another. The ideas she encountered in the course helped shape the questions she would later ask about culinary history.

One thing she didn’t do at Mount Holyoke—in fact, had never done—was cook. In Philadelphia, where she grew up, her family had employed a cook who prepared all the meals. In college, the undergraduates ate together in dining rooms, where they were served by their sister students. She loved to eat, however, and as a doctoral student at Harvard University began cooking with a housemate because the university’s food at that time was awful.

Their initial meal proved a challenge. “My task was to cook a potato,”  Wheaton recalls, “and I didn’t know how to cook a potato. The next morning I bought my first cookbook.”

That was Irma Rombauer’s The Joy of Cooking, originally published in 1931, which had become a bestseller during World War II. For Wheaton, it was the beginning of an enduring love of cooking that encompassed dinner parties for friends and everyday meals for her family. This kitchen experience would inform her scholarly approach to reading cookbooks. “I look at the recipes, and I mentally try to prepare the dish. Each one is like a little action—actually a succession of actions. It has sensory qualities for the cook as well as the eater. You put your whole body into the cooking if you’re on task. It’s physical as well as mental.”

I came to realize that cooking, like other crafts and skills, has a history, and it’s very much affected by the place and time it’s happening in.
—Barbara Ketcham Wheaton ’53

She traveled to other European locales, buying cookbooks wherever she went. Soon she grew curious about why, and how, such different styles of cooking had developed across the continent. Influenced by her art history training, and by Lemaire’s geography course, she started seeing cooking in a new light. “I came to realize that cooking, like other crafts and skills, has a history, and it’s very much affected by the place and time it’s happening in. After that, it became quite interesting to me.”In a few years she would advance beyond what she calls “the Irma Rombauer and Betty Crocker stage.” After earning a master’s degree in art history in 1954, she dropped out of Harvard to marry a fellow doctoral student. In 1958, the young couple moved with their infant daughter to the Netherlands so Robert Wheaton could study Dutch history at Utrecht University. Barbara Wheaton began cooking from La Bonne Cuisine de Madame E. Saint-Ange, a meticulously detailed 1927 manual on French home cooking that inspired many chefs, including Julia Child. “I was marketing in Dutch and cooking in French,”  Wheaton says.

In 1960, the family returned to Cambridge, where Wheaton was home with toddlers and desperate for intellectual stimulation. She got a card for Radcliffe’s library, hoping to find something to read. “I went upstairs,” she says, “and walked along the rows of shelves and saw Eileen Power’s translation of a medieval French cookbook.”

Le Ménagier de Paris (The Goodman of Paris) was written in the late 1300s by someone—the identity of the author is unknown—who purported to be an elderly man educating his young bride about household matters. “I was fascinated,” Wheaton recalls. “When my children were asleep, I had something to read and think about.”

Power provided footnotes that led Wheaton to English medieval cookbooks. From there, she read German and Italian medieval cookbooks. Within months, she’d told friends she wanted to write a history of European cooking from the Middle Ages to the present. Eventually her husband suggested she narrow her scope so she would be able to finish.

The family’s 1964 move to Paris, prompted by her husband’s decision to change history specializations from Dutch to French, helped her find a focus for the book: French cooking in the early modern period. Though Wheaton’s two years in Paris weren’t carefree—her husband was away alternating fortnights on research trips, and Wheaton had young children to look after—she was able to spend time in the reading room of the Bibliothèque Nationale de France (the equivalent of the United States Library of Congress). She also took cooking lessons at L’École des Trois Gourmandes with Louisette Bertholle and Simone Beck, Julia Child’s partners in writing Mastering the Art of French Cooking.

Yet she was almost entirely alone in her work because culinary history still had not emerged as a field. “As a shy person, it was very nice because I didn’t feel intimidated by any experts,” she says.

In fact, it would be fifteen years before she met another culinary historian, Joyce Toomre, a translator and writer specializing in Russian food. In early 1980, at the invitation of mutual friend Ann Robert, Toomre and Wheaton met for lunch at Robert’s restaurant, Maître Jacques, in Boston. Over salmon in puff pastry, they began a friendship that led to the founding that spring of the Culinary Historians of Boston, the oldest such group in the US.

Much has changed in Wheaton’s career, and in the field of culinary history, since that group’s first meeting, a brown-bag lunch in Radcliffe Yard. In 1983, her book, Savoring the Past: The French Kitchen and Table from 1300 to 1789, was published to wide acclaim. In addition to teaching in the Radcliffe seminars, she went on to serve as honorary curator of the Schlesinger Library’s vast culinary collection, which houses the papers of luminaries such as Julia Child, Elizabeth David, M.F.K. Fisher, and Irma Rombauer. She has assisted researchers with a wide range of projects, including author Allegra Goodman, whose 2010 novel, The Cookbook Collector, features a fictional cookbook collection that Wheaton helped Goodman create.

At age eighty-three, Wheaton remains passionate about sharing her knowledge with others. Her yearly seminar on reading cookbooks in a systematic way has become increasingly popular, drawing an international group of scholars in diverse disciplines as well as museum interpreters, food writers, and professional cooks. She always tells participants they will know less at the end of the seminar than at the beginning; that is, they will make discoveries that challenge their assumptions.

Indeed, those surprises are why, after fifty years, Wheaton still finds her work exciting. “There’s so much more to learn,” she says. “The longer you study something, the more puzzling it is.”

Sonia Scherr is a freelance writer based in New Hampshire.

3 responses to “A Scholarly Feast”