DA for the Downtrodden: Betsy Scheibel Ends Three Decades as a Victims’ Advocate 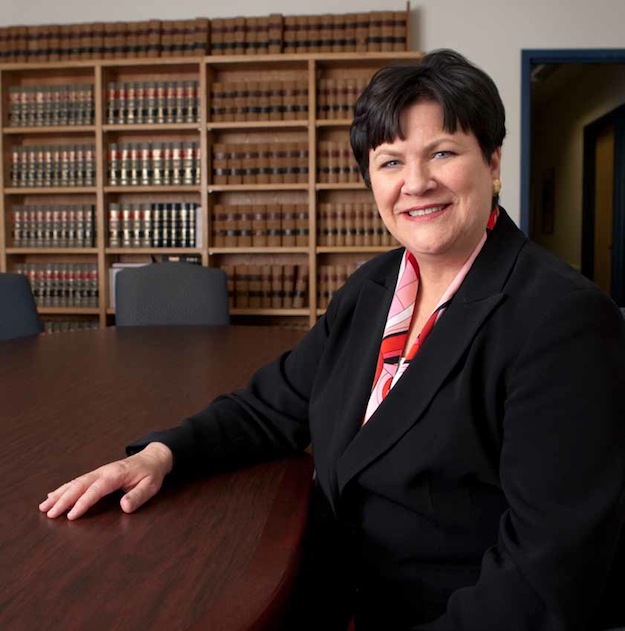 Betsy Scheibel ’77 was named one of the Boston Globe’s “Bostonians of the Year” for her pioneering prosecutorial work.

When Elizabeth “Betsy” Scheibel ’77 woke up to find her clothes dryer on the fritz on the first day of her retirement, she says, “I actually went to the laundromat and did some wash and ran errands, and it felt great. It felt terrific.”

The first female district attorney in the history of the commonwealth of Massachusetts, Scheibel retired in January at age fifty-five after a thirty-year career as a prosecutor, including almost eighteen years as DA. The 24-7 nature of the job left little time for pretty much anything else, hence her delight in doing something as quotidian as the wash.

If Scheibel’s name sounds familiar, it’s perhaps because she was the prosecutor at the center of the Phoebe Prince case, which made international headlines last year. Fifteen-year-old Prince committed suicide in January 2010 after reportedly being relentlessly bullied at South Hadley High School—Scheibel’s alma mater. As Northwestern district attorney, Scheibel brought charges against six of Prince’s fellow students and alleged bullies.

The indictments ignited a firestorm—and brought Scheibel’s tenure as DA to an unexpectedly high-profile conclusion. “I never in a million years believed that the Prince case would garner the kind of attention that it did and snowball as it has,” she says. “I honestly thought my last year [in office] would be sort of riding off into the sunset, drifting slowly out of the job and into something else, and it turned out to be something so completely different.”

But destiny had other plans for her. Impressed that her future husband, South Hadley attorney Paul Boudreau, was so enthusiastic about the law, Scheibel decided to give it a try herself. She enrolled at Western New England College School of Law in nearby Springfield, Massachusetts. Although she was naturally reserved, she found herself drawn to criminal law and trial work. “For many years, friends of mine from high school or college couldn’t believe that I would become a trial lawyer,” Scheibel says. “It was interesting for me to see the transformation.”

She began her prosecutorial career at the Hampden district attorney’s office in Springfield in 1980 and moved to the Northwestern district attorney’s office in 1988. She made Massachusetts history five years later, when then-Governor William Weld tapped her boss, Judd Carhart, for a judgeship, and appointed Scheibel to succeed Carhart as DA. Scheibel, who had just turned thirty-eight, was sworn in at Mary E. Woolley Hall. She finished Carhart’s term, then ran as a Republican for the office—unopposed—in the next four elections.

“It was a combination of having done the work and being in the right place at the right time,” she says. “I started at the very bottom and worked my way up.”

As Northwestern district attorney, Scheibel had a jurisdiction of forty-seven Massachusetts cities and towns, a staff of about 100, a budget of almost $5 million—and two prime concerns: “First and foremost,” she says, “my priority was the prosecution of criminal cases in a way that was fair and respectful to all parties. The second priority was the commitment to education and outreach as a way of reducing and preventing crime.”

Sometimes the two overlapped—as in 1993, when a local man named Sean Seabrooks stabbed to death his ex-girlfriend, Sherry Morton, and their eighteen-month-old son Cedric, sparking one of Scheibel’s earliest—and biggest—cases as DA. Not only did she succeed in convicting Seabrooks on two counts of first-degree murder (priority #1), but also she used the opportunity to tackle the problem of domestic violence both at home and abroad (priority #2). Notably, she traveled with Morton’s mother, Yoko Kato, to her native Japan, where they kick-started a national discussion about battering that led to the passage of Japan’s first anti-domestic-violence law.

“Betsy is a one-of-a-kind woman,” Kato says. “She was the main reason that Japan passed the first law to protect women and children, and I’m really thankful for that. Because of her, Sherry and Cedric’s lives didn’t just end with a domestic-violence murder but went on much further to help the Japanese people.”

Scheibel’s handling of the Seabrooks case set the tone for her term as DA and established her as a powerful voice for victims and survivors. She went on to advocate on behalf of quite a few other disenfranchised groups, including abused children, elders, people with disabilities, and traumatized veterans—and did so in innovative ways. For instance, she partnered with ADT Security Services to provide domestic-violence victims with home and personal alarms; helped implement a program that aims to protect the susceptible elder population from targeting by criminals; established a first-in-the-nation model for recognizing, reporting, and responding to abuse against individuals with disabilities; and educated law-enforcement officers on interacting with recently returned veterans dealing with post–traumatic stress disorder, adjustment disorder, and other issues.

Such work was “one of the great joys of my professional career,” Scheibel says, and earned her a reputation as a pioneering victims’ advocate. As her successor, David Sullivan, told the Quarterly, “Throughout her illustrious career as a prosecutor, [Scheibel] fought for our most vulnerable citizens—children, elderly, battered women, and disabled people. She leaves a proud legacy of fighting for justice.”

In bullying, Scheibel may have found her greatest cause of all—and, perhaps, the doorway to a second career. In January, the Boston Globe named her a “Bostonian of the Year” for her role in prosecuting the Phoebe Prince case, and in February she testified in Boston before a special commission set up to review the state’s new anti-bullying law. (She favors toughening the legislation, which was largely prompted by Prince’s suicide.) And she has publicly mulled the possibility of becoming a consultant on bullying prevention, although she has yet to hang out her shingle. “I’m looking for that teachable moment,” she says. “How can we learn from this and other instances of bullying? How can we begin to change the culture so that this isn’t the norm and it’s not acceptable behavior?”

For the time being, Scheibel is intent on enjoying her newfound freedom. “I am wide open right now,” she says. “I fully understand all of the things I’ve missed these many years. It’s been a blast in the last few months to begin to reconnect with family and friends, so this has been a great beginning for me. I seem to be smiling most of the time now.”