Sehba Sarwar ’86 Answers “What is Home?” 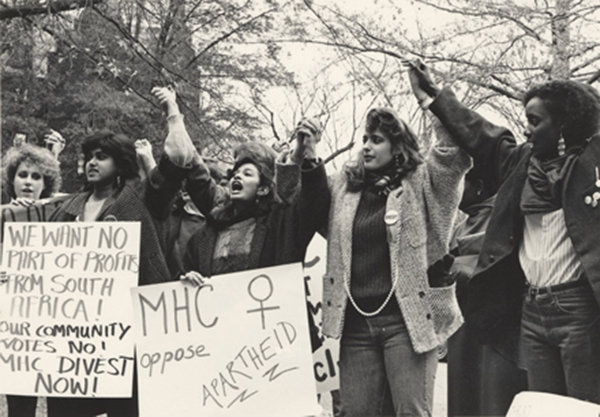 The 1905 Fellowship, awarded last spring by the Alumnae Association to Sehba Sarwar ’86, is one of a few grants currently funding Sarwar’s memoir, What Is Home? “Everything I do is centered around that question,” she says when describing the breadth of her work. “I didn’t quite understand that until I started working on this manuscript.”

Sarwar’s answer to this central question is shaped by her identity as transnational: “I can step out of the airport in Karachi and feel at home, and I can do the same here in Houston.” Born and raised in Karachi, Pakistan, she arrived at Mount Holyoke in the fall of 1983. “It was really the first time I had left home,” she says. A “collage” of different, thematically tied stories, Sarwar’s memoir shares her unique encounters with identity, borders, citizenship, family, and culture.

I can step out of the airport in Karachi and feel at home and I can do the same here in Houston.

A multidisciplinary artist, Sarwar’s video collages have been screened in Pakistan, Egypt, India, and several cities in the United States. But, she says, “I have always been a writer first.” Her first novel, Black Wings, formed from her independent study at Hampshire College, was published in 2004; her short stories, poems, and essays have appeared in many publications including the New York Times Sunday Magazine, Feminist Press, and Harper Collins India; and through her blog, she documents the multiple realities she inhabits as a result of living in a divided world.

“It’s just amazing,” she says when asked about receiving funding for her writing. The 1905 Fellowship is awarded to an alumna regardless of year of graduation, field of work, or place of study. The award has allowed Sarwar to temporarily let go of some of the administrative duties that filled her days as the artistic director of Voices Breaking Boundaries (VBB), a Houston-based non-profit arts-activist organization she founded fifteen years ago.

Sarwar plans to include her memoir—which she hopes to complete by spring 2015—in a larger artistic project called What Is Home? that addresses issues of migration, borders, and labor. The project grew out of a two-year residency with the Houston-based Mitchell Center for the Arts, and she is currently developing it into a multidisciplinary production through a new grant award by the Mid America Arts Alliance.
She strongly believes in the power of personal storytelling when it comes to transcending borders and battling injustice. In 2013, she presented at TedXHouston, saying, “In response to a fast changing world, we must all adapt fast, make sure we listen, document our truths, and bring up the next generation to know as many worlds as possible.”
—By Olivia Lammel ’14

Thanks to generous gifts from alumnae, the Association offers fellowships to Mount Holyoke graduates each year. Applications due by January 15 and are disbursed July 1. Learn more »