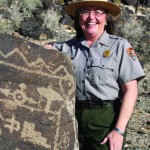 Diane Souder ’75 once hoped to solve one of America’s most vexing problems: poverty. This national park ranger now says she’ll settle for getting every child in the Albuquerque, New Mexico, school district to visit Petroglyph National Monument before they graduate high school.

Chief of interpretation and outreach at the monument, which contains an estimated 25,000 rock carvings reflecting the spirit life of the indigenous tribes who created them, Souder’s work incorporates her interests in urban planning, resource management, and the outdoors. The site encompasses more than 7,000 acres within Albuquerque city limits and is the only one of 397 national park units jointly managed by the National Park Service and a city. Some 150,000 people visit every year.

An urban studies major at MHC, she received a master’s degree in urban planning from the University of Michigan and eventually landed in the Southwest as a VISTA volunteer, working with Indian tribes on land-use issues. After the federal Heritage Conservation and Recreation Service, where she worked, was absorbed into the National Park Service, she was asked to help plan the petroglyph monument to protect and interpret the thousand-year-old carvings and make them accessible to everyone.

The federal government didn’t own any of the land or have money in the budget for the project when she started. And together with the park superintendent, Souder worked for four years to draft a detailed plan for the monument that was finally established in 1990.

Twenty people now work at the site, but Souder’s responsibilities still include a little bit of everything, from opening the visitor center in the morning to writing educational video scripts to leading a walking tour through the park. She happily notes that she wears hiking boots to work every day to appreciate the offerings of the often-sublime geography.

“It’s Mountain Day every day,” Souder says of her job.—M.H.B.