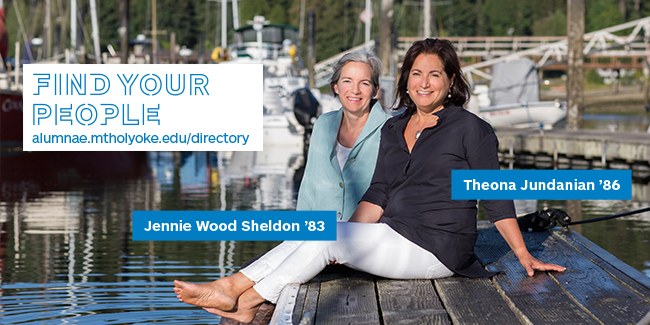 Jennie Wood Sheldon ’83 returned to the Pacific Northwest in 2002 from New York City. She and her family landed on Bainbridge Island near Seattle—about the same size as Manhattan, though the similarities end there. In 1991 Theona Jundanian ’86 married a native Seattlelite after law school and relocated to Seattle. After twenty years in the city, her family moved to Bainbridge. Fast forward to fall 2012, when both Jennie and Theona’s daughters started rowing with Bainbridge Island Rowing. Neighborhood carpools quickly formed to support the daily saltwater practices that often went until after dark. But it wasn’t until a regatta the following spring, cooking for more than one hundred kids out of a tent, that Jennie and Theona pieced together that not only did they both graduate from MHC but that they also lived in Mead during Jennie’s senior year when Theona was a freshman—the proof is in the yearbook! Their daughters have become fast friends and have rowed together in the girls’ lightweight 8 for three years, even competing in the 2014 Junior Youth National Championships. Jennie and Theona live about a half-mile from each other—just a little farther apart than they did when they were undergraduates together in Mead Hall.