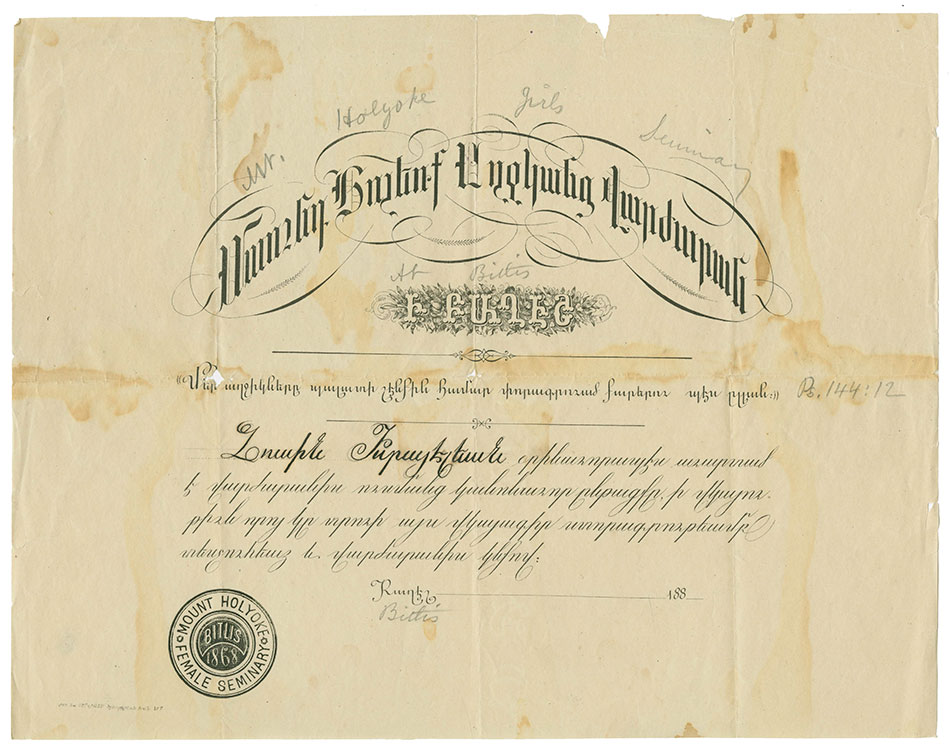 Diploma, circa 1868. Courtesy of Archives and Special Collections

Archives and Special Collections has in its collection a diploma from the Mount Holyoke Seminary in Bitlis, Turkey. Yellowed from time and dappled with water spots, the certificate shows lines indicating it was once folded in eighths, to the size that might fit in a pocket. The top edge and both sides have a few small tears. Despite its condition, the text—written in Armenian—is legible.

Arching black script letters adorned with swoops are translated into English in scrawled pencil above each word: Mt. Holyoke Girls Seminary. Just below this header, in another ornate font, At Bilits is also written in pencil. Between two decorative rules, a line from Psalm 144:12 is penned in a less formal script. This scripture has been translated variously in different versions of The Bible, but in this case, the school’s founders likely intended the line to match the one on Mount Holyoke’s diplomas of the same time period: That our daughters may be as corner stones polished after the similitude of a palace.

In a fourth style is written: Lousin Israelian has formally completed our school’s educational courses as witnessed by the signature of the superior and seal of the school on this certificate.

The seal referenced is a circular stamp in the bottom, left-hand corner of the document and the only part written in English. The outer edge reads Mount Holyoke Female Seminary, and in the center is Bitlis 1868, the date of the school’s founding. The date of the diploma is unknown.