Find Your People: Across Generations 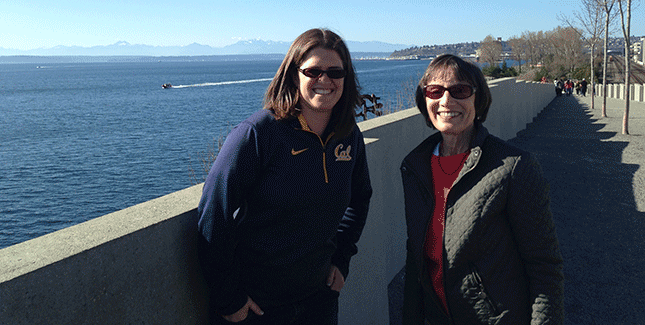 In the fall of 2013 Jenny Simon-O’Neill ’02 was attending her first meeting of the Gender, Equity, and Diversity subcommittee (GED) of the University Athletics Board at the University of California, Berkeley, a group tasked with examining gender equity and diversity issues within intercollegiate athletics. When Jenny, then associate director of athletics, introduced herself, she mentioned she was a graduate of Mount Holyoke.

“I saw this woman’s eyes light up immediately,” Jenny says. Margaret (Meg) Conkey ’65, cochair of the subcommittee and professor emerita of anthropology at UC-Berkeley, immediately introduced herself, sharing her own Mount Holyoke connection, and this brief exchange was the beginning of what has become a close working relationship and deep friendship.

Later that same year, in response to a fall 2013 NCAA report that showed low graduation rates for athletes on UC-Berkeley’s football and men’s basketball teams, the University established the Task Force on Academics and Athletics, a twenty-member panel of students, faculty, alumni, and staff, charged with examining the relationship between athletics and academics. Jenny was selected to join the task force, and Meg was asked to serve as chair, while they both continued to serve on the GED subcommittee.

Meg would always say it was very important to her that the work she did on campus was work she saw as ‘architectural’ rather than ‘housework.’ It’s about changing the institution. I think that’s a very Mount Holyoke way of thinking.Jenny Simon-O’Neill ’02

Meg was nervous to be stepping into the role of chair, leading a huge task force and bringing together people from various parts of campus. She immediately looked to Jenny for guidance.

“Jenny was my prime aide in both understanding more about intercollegiate athletics and in strategizing what was often a very tense and challenging committee,” Meg says. “We shared an understanding of the positive values of playing sports, especially for women, as well as how important it is to attend to issues of equity, academic values, and diversity.” 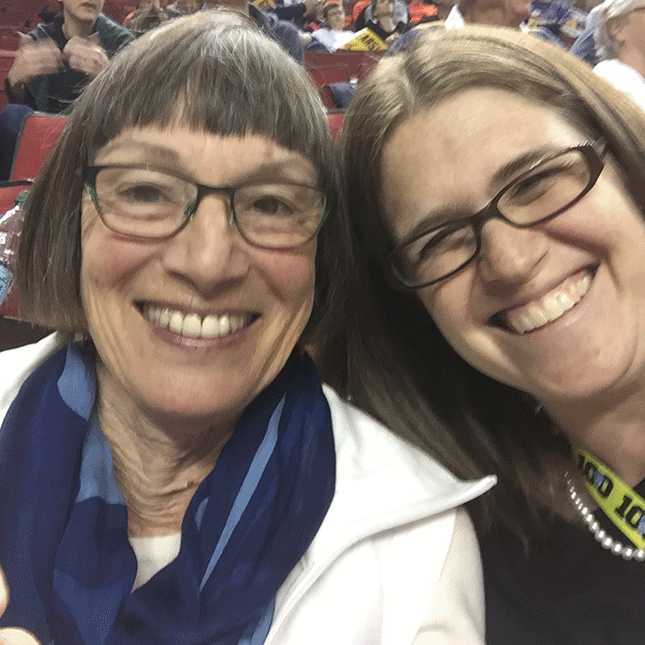 As Jenny and Meg continued to work together they realized that despite their generation gap, they have a lot in common, and their working styles are similar. Jenny says, “The Mount Holyoke connection is hard to capture. It’s more about the way we approach things. Meg would always say it was very important to her that the work she did on campus was work she saw as ‘architectural’ rather than ‘housework.’ It’s about changing the institution. I think that’s a very Mount Holyoke way of thinking.”

As a new parent, Jenny often relished in the fact that she could rely on Meg for advice on navigating career and family.

“I was a parent of an eighteen-month-old at the time, so it was not rare for me to be up at two or three in the morning,” says Jenny, who often used the early morning hours to send emails to Meg about the work they were doing at the time. “It was a wonderful time to have Meg in my life.”

While their outlook on career, family, and values are similar, they don’t always take the same approach. Meg recalls a time when they met for one of their many “mind-mapping” sessions; Jenny brought her laptop, while Meg brought a big sheet of paper and a pencil, preferring “old-school” brainstorming methods to modern technology. “It was definitely a funny meeting of the generations,” says Meg.

We are some thirty-seven years apart, but that distance is collapsed in this shared foundation.Margaret (Meg) Conkey ’65

While Meg has since retired from faculty work at UC-Berkeley and formally stepped down as cochair of the GED subcommittee—passing the torch to Jenny—she remains active on campus, continuing to serve on various committees and consulting with Jenny.

Their working relationship has blossomed into a true friendship; they frequently visit each other’s houses, serve as sounding boards, lend advice, and bond over family connections in shared hobbies including music and rowing.

“Meg has been a great friend and mentor over the years,” says Jenny, who was named senior associate athletics director and senior woman administrator in October 2016. “We have experienced some challenges together, and having that common thread of MHC to tie us back to each other is incredible.”

Meg adds, “I think it’s incredible how two Mount Holyoke graduates—across many decades—have found a common connection in our college experience and confidence in each other because of this connection. We are some thirty-seven years apart, but that distance is collapsed in this shared foundation.”

One response to “Find Your People: Across Generations”