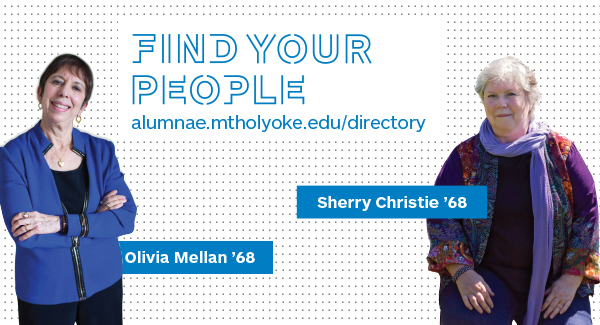 Writer and editor Sherry Christie ’68 and speaker, author, and money coach Olivia Mellan ’68 reconnected at their twenty-fifth reunion when Sherry asked to interview Olivia about couples and money. “Sherry did the best article about me that I’d ever seen,” says Mellan. “Now I never write anything without her.”

Though both French majors, the two hadn’t known each other well at college. Sherry lived in Ham Hall, at that time a language-only dorm, while Olivia spent junior year abroad in Paris. Their reunion on campus in 1993 launched a highly productive partnership that has resulted in more than 200 articles and five books about money psychology, including Overcoming Overspending and an updated edition of Mellan’s Money Harmony for individuals and couples.

“It’s a work marriage made in heaven,” the two alumnae agree. Next on their to-do list: a guide to help women feel more confident about their money.