Turning a love of video games into an exciting career 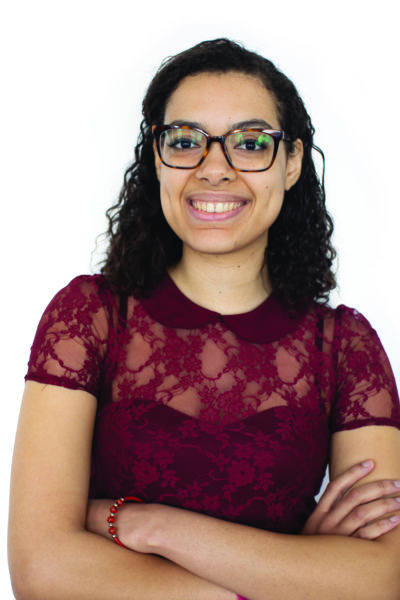 Allegra Frank ’15 is the associate culture editor at Vox, a news and opinion website. A film studies major, she began her career — almost immediately after graduation — at Polygon, a website that covers news, business, culture, reviews and videos related to gaming, where she served as deputy news editor until leaving for Vox in March. Frank is also co-host of the weekly podcast “The History of Fun,” which examines everything from Hello Kitty to presidential turkey pardons, and previously co-hosted “The Polygon Show,” a podcast about video games and the culture around them. In a profession where the subject matter has been dominated by white males, Frank is frequently the only woman in the room, as well as the only person of color. Learn more about Frank by following her on Twitter @legsfrank.

On gaming and her job:

I’ve always loved video games, but as a kid I didn’t have money to buy any, so instead I read news about them and stalked gaming forums and sites for hours and hours. I knew a lot about a lot of different games even though I had never played them — and still have never played [most of] them. I finally played Halo last year — that was a huge game when I was about 6 years old!

I don’t think you have to be a video game mastermind to be okay at this. I have a pretty specific knowledge base, and it’s really just about being able to do research. [At Vox] I trawled around for news on Twitter, Reddit and YouTube. I had curated lists of different influencers and fan sites, player communities and other news sites, and I looked at those every day. I did a sweep of what’s the big thing everyone’s talking about: What’s getting a lot of likes? What do I find personally interesting? I had very specific beats — Pokémon and Nintendo — so I’d look at those communities a lot — also cartoons, anime, anything Japanese. I like artsy, weird, tiny games, but I only get to write about that stuff for my own sake.

On being a woman of color in the gaming world:

Recently, I got a really racist, offensive email. That’s actually rare, but it reminded me that some people are reductive like that. It definitely has taken some time to be confident about being a person of color in this notoriously toxic industry, but I have a good team supporting me. And, when I go to bigger events, I know if I see that another woman will be on a panel with me, I get excited. I do feel a bit outside looking in, so I just have to be more assertive than I usually am in terms of saying, “Hey, I’m from a respected outlet, and I was trusted to come to this important event. That means I deserve to be here. I know that I do good work.”

A lot of video game podcasts are all male, very serious and have an aggressively boys’ club sense of humor. “The Polygon Show” is a funny, sweet show — I am one of four women sitting at a table and talking about a specific theme or game. We have friendly, chatty conversations about games, movies and food. We get serious sometimes, but we think of it as friends hanging out, and we want people to come hang out with us. We have a great fan base — most of whom never really feel represented in the gaming world — and we are diverse women they can look up to.

In January, we went to PodCon 2, which is a big fan convention for podcasts, hosted by (video blogger and internet producer) Hank Green. He came to me and said, “I want to do a skit with you in the closing show where you host an entire season of a podcast in 10 minutes and every episode’s one minute long. It’s called ‘One Question with Allegra Frank.'” And I said, “I’m totally in.” So it was pretty much me on this weird improv journey in front of the entire audience.

This article appeared as “Gaming Changer” in the spring 2019 issue of the Alumnae Quarterly.