A Chicago Police Sergeant on Her Call to Serve 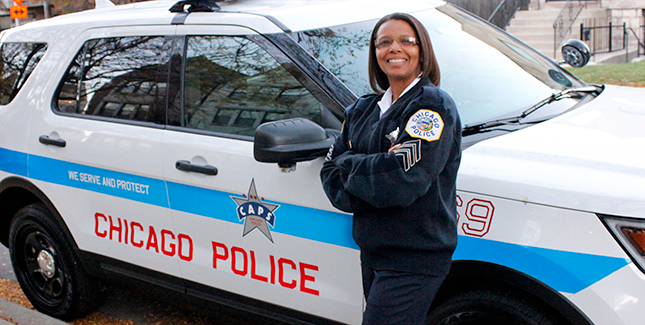 Initially thinking she would embark on a career as an entertainment lawyer, a turn as a paralegal led Monique Washington ’91 into public service, which propelled her toward a master’s degree in criminal justice and her job as sergeant for the Special Victims Unit (SVU) of the Chicago Police Department. Washington says she is often asked if she was ever fearful when embarking on her profession. But she says fear didn’t play a role. Instead she embraced the opportunity to shift her focus toward helping victims of crime. And she has never looked back. 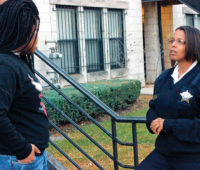 On figuring out what she didn’t want:

I did pretty well in my politics classes (thank you, professors Walter Stewart and Gita Choudhry), so I figured I would go to law school. . . . But the turning point came [when] I was visiting an aunt and we were discussing my plans after graduation. She suggested that before I apply to law school, I take a year off and work at a law firm to see what lawyers do. It did not take me long to figure out that I didn’t want to be a lawyer. However, it was when I was managing the firm’s pro bono program that I became passionate about public service. While researching and vetting the different kinds of cases, I became very interested in the criminal cases. So I decided to get a master’s degree in criminal justice and, at the time, Loyola University Chicago was one of the few schools that had a graduate program.

The joy comes in being able to provide some sort of relief or comfort or assistance to victims and their families during some of the most distressing times of their lives.
Monique Washington ’91

On her work in the special victims unit:

On any given day I may be providing field supervision for a child abuse case where a victim is in critical condition in a hospital, meeting with a domestic violence victim who may be afraid or unwilling to come to our office, meeting with the parents of a juvenile offender who are asking for help with their child, or out with my team looking for a missing elderly person with dementia. I definitely make a point of going out on cases involving female victims if I do not have a female detective available. Some days I may be doing several of these things.

It is certainly a difficult job, and it’s very often emotionally draining because a lot of what we are dealing with in SVU is the victimization of children and the elderly. But the joy comes in being able to provide some sort of relief or comfort or assistance to victims and their families during some of the most distressing times of their lives. There is nothing better than being able to help another human being.

On how Mount Holyoke influenced her:

I know that my experience at Mount Holyoke definitely helped shape who I am as a person, and who I am as a person has shaped the type of police sergeant that I am. I learned that it was OK to take pride in being a capable woman who could express independent thoughts and opinions. I also learned the importance of helping other women and extending one’s self in support of another person.