How a Mount Holyoke alumna became a craft beer entrepreneur 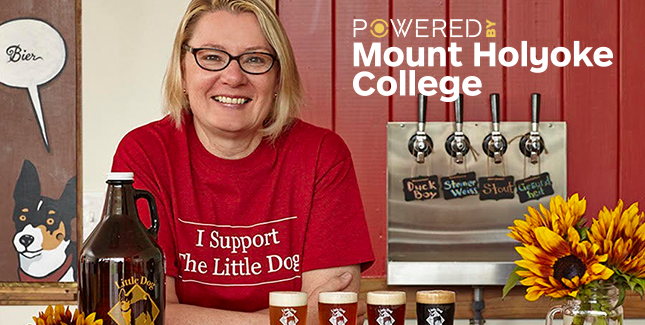 …
In 2014 Gretchen Schmidhausler ’81 founded Little Dog Brewing Company, a four-barrel craft brewery in Neptune City, New Jersey, that specializes in handcrafted, small-batch brews. While opening her own brewing company fulfilled a longtime goal, her journey took a bit of a winding, yet serendipitous path.

After spending 10 years post-graduation with the Asbury Park Press, Schmidhausler worked in various roles, including for a medical marketing company, while simultaneously homebrewing beer in her spare time.

After being laid off from her job at the medial marketing company, Schmidhausler felt her life was at a crossroads, and she wasn’t sure what her next move should be. Right away she received a phone call from Red Bank Brewing Company, the store she frequented to buy her homebrewing ingredients. She was offered the opportunity to manage the shop while they morphed into a microbrewery.

It was during this time that Schmidhausler learned a big part of her craft. “Unfortunately, Red Bank Brewing Company was short lived,” she says. “They were ahead of their time.” Microbreweries hadn’t yet become the successful model they are today.

But, Schmidhausler had landed on her next career ambition. She started sending out feelers to other companies, but nothing was sticking. There were fewer than 20 breweries in the state, and no one had a full-time staff.

Schmidhausler decided to attend brewing school, a step that would not only build her skills but also her confidence.

With the help of longtime friends who lent her the money and house sitters who stayed in her home to take care of her pets, Schmidhausler began a three-month residential program in California. “It was the best thing I ever did,” says Schmidhausler. After nearly a decade of working at a couple different breweries after finishing school, Schmidhausler decided it was finally time to open her own company, Little Dog, whose name was inspired by Schmidhausler’s love of dogs and whose mascot is her beloved dog, Quincy, who passed away in 2016.

In opening Little Dog, Schmidhausler relied on the varied skills taught at Mount Holyoke. “Everyone I met [in the industry] came from a different field. Everybody was in their 30s or older and came from either a liberal arts or scientific background,” she says. Schmidhausler also does all the business writing, social media, advertising and website work herself. It’s no coincidence that she’s a Mount Holyoke graduate and has the confidence to wear many different hats.

Schmidhausler knows that she’s breaking stereotypes, being a female brewer, but she’d rather focus on her achievements. “I know a lot about beer and brewing, but it took me 20 years to get to this point,” she says. “I never felt the fact that I was a woman made a difference. I was and still am more knowledgeable than a lot of people in the business. I’m very comfortable with what I’m doing. This was the right direction for me.”