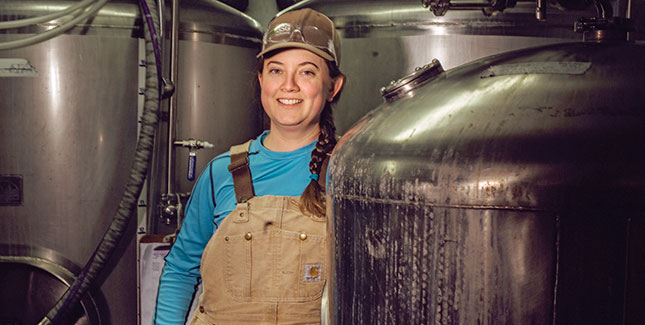 Kate Irvin Telman ’08 is the assistant brewer at The People’s Pint in Greenfield, Massachusetts, a restaurant that serves fresh-brewed beer and locally sourced food. Her role at the restaurant — a local favorite — is to shepherd the beer from raw ingredients to finished products, producing new batches a few times each week. She worked hard to attain her first job in the industry, calling on the same determination she used to secure chemistry internships as an undergraduate.

Read how another Mount Holyoke alumna turned her homebrew into a business.
Web exclusive

On her undergraduate experience:

I came to Mount Holyoke wanting to major in chemistry and Spanish, and I did. I liked what I was doing and kept up with it and had a really interesting internship every summer. To get these highly competitive internships I wrote to all of the forensic labs in California that I could find, reaching out until someone got back to me. I worked in a forensic lab that had overflow work from government agencies and private citizens, and I worked with a forensic chemist and on various protocols to be able to assess different chemicals in certain substances. But, through all of these different jobs, I realized I didn’t want to be in a lab by myself doing research. The work I did with the campus ministry, both during my time as a student and in the five years following graduation, when I joined the staff, helped me to realize that there were more ways that I could make a career.

I grew up with a dad who is thrifty and who also likes to drink good beer. He was a home brewer, and I was an extra pair of hands to help bottle. He’s a scientist, too, so it was like a grown-up extension of the science experiments we did together.

After college I started brewing in the basement of my first apartment. It’s like the organic chemistry of cooking. It takes a long time, and eventually you produce a product that you can consume.

It’s really tasting a beer that I made and thinking, ‘OK, what would I change?’Kate Irvin Telman ’08

On making her own opportunities:

I home brewed a bunch of batches and took them around to about a dozen local breweries. I had written up descriptions of the beers, and I had my resume ready. Then, I went to events in the area where I knew I’d cross paths with brewers and people in the industry. I made myself available, told them I was looking for a job, and about four years ago I got an email from the head brewer at The People’s Pint saying he had a part-time bottling position. I accepted the position, even though it was only 20 hours a week and wasn’t going to pay the bills. I started in bottling, and in six months I had brewed my first batch of beer, using one of my home-brew recipes. A year later, I became the assistant brewer.

On the benefit of having a varied perspective:

The People’s Pint has four employees in the brewery, and I think it’s really helpful when you have a variety of perspectives working together, especially in a group that small. It produces better results. Taking classes outside my major and being around people with different interests inspired me. I felt the freedom to go into a career that was nontraditional because I knew the range of skills I had prepared me for what was to come.

This article appeared as “Recipe for Success” in the summer 2018 issue of the Alumnae Quarterly.