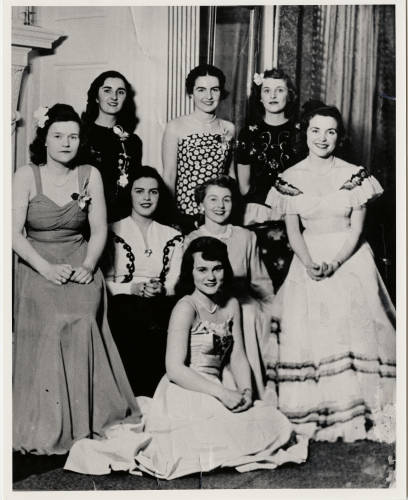 In October of 1942, a group of eight songstresses debuted their skills at Junior Show. As the accompaniment to a student dance number called “My Pajama Ballet,” the singers were off stage, hidden from the audience. By the time their performance was over, however, the crowd had made it clear by demanding encore after encore that the women had created something spectacular.

To this day, Mount Holyoke’s V-8s is the longest-running female a cappella group in the nation, a well-known fact among Mount Holyoke students. Their legacy extends far beyond campus, however, as the original V8s found fame in New York City by entertaining World War II servicemen at one of the most popular clubs of the 1940s.

The original group can be credited with a turning of the tides on the Mount Holyoke campus. A 1944 article in the Mount Holyoke News described the original performance of the V-8s as “the only evidence, so far as we know, of a former [Junior] Show success continuing as a new college tradition.” In a 2002 letter to the current V-8s, founder Abigail Halsey Van Allen ’44 wrote, “[the group] was conceived as an opportunity to have fun!”

While opposition the original V-8s faced was very slight, it did exist. “Often the music director of the Glee Club and choirs of the time … looked in on us, but did not seem too happy with what we were doing,” Joan Morris McNally ’44 remembered of rehearsals. The selection of modern songs for performance created some waves within the music community, but the V-8s had found something that stuck.

The origin of the group’s name is about as telling of the times as the hairstyles and dresses the women boast in faded photographs. The “V” stood for “Victory,” Winston Churchill’s rallying call of the World War II era. The 8, of course, stands for the eight original members. “Churchill’s raised index and middle fingers of his right hand forming a V for Victory was very pervasive,” Van Allen wrote. “Victory became the spirit of the times.”

The fame of the V-8s began to spread off-campus soon after their debut in Wilbur, Mount Holyoke’s then-student center. They performed at the Westover air force base, parties held for textile-mill workers, and meetings of the Junior League. The V8s were also the first amateur group invited to perform at the Stage Door Canteen in New York City, the most famous entertainment venue for servicemen and the subject of a feature-length Hollywood film (Stage Door Canteen) that debuted the year before the V-8s made their appearance.

The women were largely unimpressed by the Canteen at first glance, according to a scrapbook put together about the original V-8s. Described as reminiscent of someone’s basement, it was not at all what they had been expecting, considering the Canteen’s publicity and fame. The noisy, smoky room in which they performed was so small that some of the servicemen in the audience were actually sitting on the stage with them. The V-8s delivered a rousing performance of popular songs like “The Farmer and the Maiden” and “The Hawaiian War Chant.” Despite the lack of a microphone for half of the performance, Van Allen described the concert as “the zenith and swan song of our original group.”

While a recording was created by the original V-8s, none of the copies exist today. All that is left are a few boxes of yellowed letters and song lists in the college Archives, the memories of the original V-8s, and, of course, the women today who bear the group’s name and legacy. While today’s V-8s have expanded to a group of fifteen, they still feature 1940s classics by Etta James and the Andrews Sisters in their repertoire, reminiscent of the women who have come before them.

Above: the original V-8s performing at the Stage Door Canteen in New York City.
The V-8s pictured are (left to right) GG Graff, Caroline Lacey, Abbey Halsey, June Hart, Joan Morris, Joan McMahon, and Connie Rheaume.
NOTE: The MHC Archives and Special Collections is searching for an original copy of this photo, which was published in the Feb. 11, 1944, Mount Holyoke News. If you have one, please contact the archives staff (archives@mtholyoke.edu).

Reflections on the V-8s Fiftieth Anniversary/Reunion

We’d like to sing, we really would—
We understand we were quite good.
But after all those fifty years,
Togetherness is gone, me fears!

Instead of blending, all as one,
With harmonies so sweet they stun
(The way we did in ‘forty-three),
We now strike chords sometimes off key.

Yet, anyway, we celebrate
The birth of our fantastic eight:
We sang by ear, and every note—
And lyrics, too— We learned by rote;

We sang at schools, at Westover’s war,
At dances, frats, and famed “Stage Door”.
But best of all, it didn’t end:
“Originals”, we set the trend

You sounded down through fifty years
And brought much joy to countless ears.
So, of ourselves we’ll not just boast—
No! No! We’d like to make a toast:

To all you friends with V-8 style
(And groups to follow in awhile);
To such sophisticated blending,
So full of flavor in the rendering;

To repertoires that change and grow;
Unique arrangements, hot and slow;
To presentations fresh and clever;
To V-8s—may they sing forever!