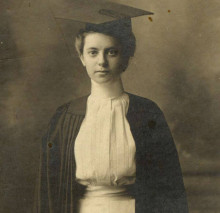 The plains of the Midwest experienced an acute sense of déjà vu during the summer of 2012. Drought destroyed crops, killed livestock, and sent farmers into bankruptcy against the backdrop of a severe economic recession. While perhaps more acute, the long-term drought that occurred during the Great Depression evoked many comparisons between then and now. Always timely, last fall the documentarian Ken Burns released a four-hour account of this era titled The Dust Bowl.

In the film, Burns employs the engaging voice of a smart, capable, and tough young woman who captured the events of the time through the many letters she wrote to friends and family. What kind of woman could withstand such hardship while producing eloquent and insightful accounts? Why, a Mount Holyoke alumna, of course. In a review of the documentary, the Washington Post described Caroline Boa Henderson, class of 1901, as “Laura Ingalls Wilder with an adult awareness; imagine her as the first mommy blogger.” 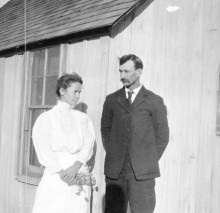 Caroline Boa and Will Henderson on their wedding day

An Iowa native, Henderson had always hoped to farm her own land, and in 1907 she traveled alone to the panhandle of Oklahoma to pursue her dream. Here she lived in a one-room shack she called her “castle,” and a year later married Will Henderson, whom she’d hired to dig a well on her property. Together they set out to make her goal a reality, building a proper home, planting millet and corn, and raising turkeys, cattle, and chickens.

In April 1908 she wrote to her close friend and Mount Holyoke classmate Rose Alden, “So here I am, away out in that narrow strip of Oklahoma between Kansas and the Panhandle of Texas, ‘holding down’ one of the prettiest claims in the Beaver County strip. I wish you could see this wide, free, western country, with its great stretches of almost level prairie, covered with the thick, short buffalo grass, the marvelous glory of its sunrises and sunsets, the brilliancy of its star lit sky at night….” Despite her love of the land, she and her husband found it difficult to make ends meet on the farm. To gain extra income, Henderson wrote articles for farm and ladies’ publications, and was even a contributor to the Atlantic Monthly, the nation’s most prestigious publication at the time.

By the time of the Great Depression, the Hendersons’ beloved plains had been overfarmed, and the deep-rooted grass that prevented erosion destroyed. Thus, when a severe and long-lasting drought set in, the topsoil had no anchor and would gather with the wind, creating immense dust clouds that covered the land, not only forcing thousands of residents (known as Okies) to leave, but also causing severe bronchial illnesses to those who stayed, including Caroline and Will Henderson. In June of 1935, Caroline wrote to another friend, Evelyn Harris, this time in a much more ominous tone, “The dust has been particularly aggravating to [Will’s] bronchial trouble, but he keeps working on. A great reddish-brown dust cloud is rising now from the southeast, so we must get out and do our night work before it arrives.” 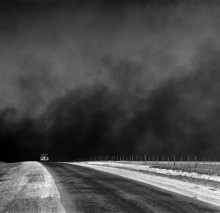 Heavy black clouds of dust rise over the Texas Panhandle

Despite ongoing hardships well past the 1930s, the Hendersons remained on their farmstead, raising their daughter and enduring the harsh environment and recurring droughts until Caroline’s death in 1966. During her lifetime Henderson garnered a national reputation as a skilled writer who gave detailed and poignant accounts of farm life during one of the worst man-made disasters in history. Today, her letters and articles continue to inform our historical understanding of the period.