Built in 1966, the Alice Withington Rooke Theatre, originally named Laboratory Theatre, was renamed in 1977 to honor the mother of then-trustee Dorothy Rooke McCulloch ’50. Located off Morgan Street between Creighton Hall and Abbey-Buckland Hall, the site was also home to the original campus theatre, Playshop Laboratory, a small experimental theatre founded in 1928 by Jeannette Marks, former English literature professor, torn down in 1965 to build the current building, commonly referred to as Rooke Theatre.

Spanning several levels and more than nineteen thousand square feet of floor space, the theatre is accessed through the main lobby, which also serves as a classroom, where Noah Tuleja, director of Rooke and lecturer in theatre arts, often teaches his advanced directing class. 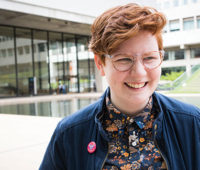 Read about the play that brought Mount Holyoke history to life on the Rooke stage.
Web exclusive

Off the lobby and up a short staircase is the main performance stage, which can be viewed by nearly two hundred people in red plush seats in an intimate, wood-paneled setting. Here, the theatre department presents several shows a year with students filling all the typical theatre-related roles, including director, actor, set designer, and costumer. The stage, twenty-five feet wide, is raised in front, with a fully equipped technical booth directly above the seating area to provide light and sound effects for each production.

On the next level is a costume shop, where wardrobe needs for each production may be handmade on site—if they are not already within the extensive collection of costumes in the theatre’s collection or available from other nearby colleges. Students can enroll in costume-making classes with Costume Shop Manager Elaine Bergeron, who also oversees the shop crews, hair and make-up crews, and student designers. In the back, behind the theatre, is the shop room, where faculty teach students the arts of woodworking and set building.

A green room for the actors features posters of past productions held at Rooke. And photos from past productions, dating back to the 1940s, line the nearby halls that lead to classrooms and faculty and staff offices.

The basement houses the theatre’s second performance space, the black box theatre, where many classes are held and student-produced work is performed. Also on this floor is a weapons cabinet, which secures props like swords and knives used for battle scenes, as well as a dressing room for the actors to use.

More than fifty years after its debut, Rooke Theatre still opens its performances to the general public, and with four diverse productions during any given academic year there is sure to be something for everyone to enjoy.

This article appeared as “Alice Withington Rooke Theatre” in the winter 2018 issue of the Alumnae Quarterly.