President Puts Into Action in Kenya 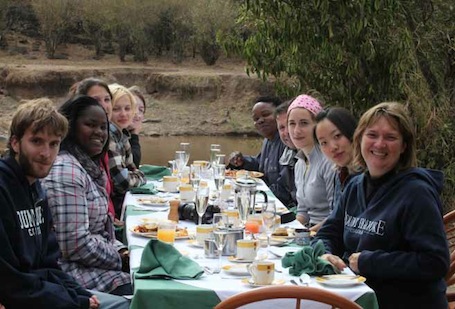 The Stakes Don’t Get Any Higher

The work of the international team led by President Lynn Pasquerella is a matter of life and death. Western Kenya suffers from both floods and widespread droughts; contaminated water is a common killer; one-third of the area’s population has HIV/AIDS; and starvation kills five people a day in some villages. One desperate mother, convinced that her daughter wouldn’t survive, thrust the child into a startled visitor’s arms, begging the woman to save the daughter’s life by taking her away. The problems are so overwhelming that many people would throw up their hands and walk away in frustration.

But that’s not the kind of person Lynn Pasquerella is. Informed by Kenyan colleague Clarice Odhiambo in 2007 about the vast needs in her home region near Lake Victoria, Pasquerella became a partner with the group Odhiambo founded, the Africa Center for Engineering Social Solutions (ACESS). For three years, Pasquerella has brought students and faculty from colleges and universities to Kenya. They become partners with local talent to improve access to food, water, jobs, and other basic needs.

The problems are multilayered and complex, but sometimes the solution to a massive problem is surprisingly simple, at least technologically speaking. And small actions can have far-reaching consequences. Take, for example, the issue of clean water.
Many people in Western Kenya sicken or die after drinking contaminated water, because enough clean water simply isn’t available. So the team combined Kenyan know-how and Western engineering to invent a cheap, ceramic filter made of local materials. First, faculty and students from US universities collected samples and tested combinations of sand, clay, and sawdust to see which provided the best filtration. Later, they designed a prototype to make batches of filters efficiently by using molds. This past August, Kenyan potters further refined the mold-making apparatus. These humble ceramic cones, each the size of a one-gallon flower pot, now filter contaminants from water and can provide income for those who make and market the life-saving devices.

“In many cases, the Kenyans have many more solutions than we do, because they know the culture,” Pasquerella explains. “They just don’t have the resources or the political power to implement them. So it’s really a partnership.” It’s also the kind of meeting of the minds and cultures that delights Lynn Pasquerella. 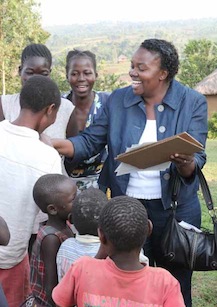 And in Lynn Pasquerella, Odhiambo found a colleague determined to sustain the work over several years. Each summer since 2008, an international team has gone to Kenya to ask questions, gather data, test solutions, and plan next steps. The rest of the year, they raise money and work on the challenges identified during the previous summer’s visit. One season’s unanswered questions become research projects for faculty and students the following academic year.
“The real value of the project from an educational standpoint is that it allows us to create interinstitutional, interdisciplinary research teams of undergraduates, graduate students, and faculty, working together to solve real-world problems,” says Pasquerella.
Each time Pasquerella moved to a new institution, instead of handing off the project to someone else, she kept the old ties and added faculty and students from her new institution to the mix. Now participants from Mount Holyoke, Brown University, Hampshire College, the University of Hartford, and the University of Rhode Island are involved.

ETHICS IN ACTION
Decontaminating water may seem far removed from the lofty realms of philosophical contemplation, but the project often requires putting Pasquerella’s intellectual specialty—ethics—into practical applications.
“So much of our work focuses on the psychosocial issues rather than just providing the simple engineering solutions,” Pasquerella admits. For example, she questioned the ethics of sending students into the Kibera slums—where the visitors might be perceived as practicing “slumdog tourism” (paying to see how “the other half lives”). They were actually visiting to learn the business models residents use to sell goods, and to discuss how they might be improved. “I worry about crossing the line between service and exploitation,” Pasquerella admits.
This kind of social advocacy is not new to Pasquerella, who has done nonviolence training in Colombia and China, has had students do basic legal work for prisoners to counter a lack of public defenders, has served on ethics boards, and has tutored inmates. 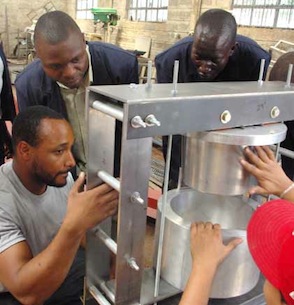 EVERYTHING IS CONNECTED
“I’ve spent my career committed to [political theorist] Benjamin Barber’s notion of colleges and universities as civic missions,”
Pasquerella says. “He talks about not only educating women to make them free but also freeing them to be educable. To do that is to provide them with the tools necessary to gain access to higher education.” How is making water filters related to securing higher education for Kenyan women? As you’ll see, everything is connected.
Before higher education for women must come some education. Since norms dictate that girls and women must provide water for their families, and since finding and transporting clean water takes up to six hours daily—thus preventing school attendance—girls rarely get a formal education. But if clay filters were readily available, females wouldn’t have to walk as far to get drinkable water, and thus could attend school.
The filters now perfected, the next step is to start microbusinesses, helping potters make and sell the water-filtration pots. Once in full swing, this will help everyone: people get jobs and a market for their products; women won’t have to trudge miles carrying heavy water cans; and fewer people die from water-borne illnesses. “It changed everybody to see how simple things can make a difference in people’s lives,” Pasquerella recalls.

THIS YEAR’S TRIP
The 2010 trip group included nineteen participants hailing from Afghanistan, Jamaica, Kenya, Poland, China, Turkey, and America. They brought determination, curiosity, and 300 pounds of equipment, including a disassembled portable press and molding tool designed by engineering students to batch-produce ceramic water filters. After a seventeen-hour flight, they were in Nairobi and started working almost before catching their collective breath. 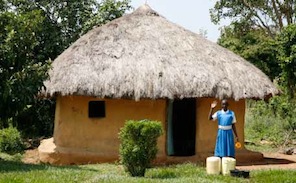 Pasquerella’s blog gives the flavor of those two whirlwind weeks: waiting entire days to see dignitaries who might support ACESS’s work, following intricate protocol to avoid offending influential village chiefs, playing soccer with local kids, and consulting with villagers to make sure the group’s efforts targeted their most urgent needs.
There was fun—a dinner in Nairobi where the group was joined by MHC alumnae and students living in the city; and a breathtaking morning drive through big-game habitat in Masai Mara—but this was far from a vacation. The visitors shared the locals’ lives, eating only when they did, often spending up to sixteen hours a day in the field with no food or water. When food did appear, it was sparse and eaten from common pots so all could share. A few bananas could seem like a feast.
“These students were the best group so far because they worked together so well as a team and were so sensitive,” says Pasquerella. One day they went from putting together the clay-pot-making press to playing with local kids. “They didn’t hesitate to pick up these babies, many of whom were HIV-positive and were spitting up on us. It was a very thoughtful, mature team.”
Pasquerella was impressed with the way the MHC students used their multidisciplinary backgrounds to “look at issues in ways I found stunning.” Yiting Wang ’11 used her background in environmental studies and international relations to help a villager think about the best way to produce food for fish he’s raising to add protein to the local diet. “Have you thought about solar power? Why are you doing it this way?” she asked the man. “It’s this constant barrage of questions that makes our students distinctive,” Pasquerella says. “It’s never taking anything for granted.”
Hilda Barasa ’12, a Kenyan, says the experience made her realize “that change needs to have a ‘trickle-up’ effect.” The key, says the double major in urban development and economics, is “immersing yourself for a while in a community, hearing the members of that community speak about their challenges, seeing their ingenious and effective (or not so effective) methods of solving those challenges, and then merging your skills, educational insights, and resources to enhance their quality of life.”
The Kenyan sojourn revealed to Wang “the fundamental importance of putting higher education coursework into a real setting to create a better world. What [the trip] has not changed are my aspiration to work in the field of international sustainable development, and my desire to explore the world and plant more ‘seedlings'” of change.
Apparently the villagers were also moved by the visitors. As Pasquerella wrote in her final blog post from the village of Kisumu, “As we were leaving the village, it began to rain. The Luo people consider rain upon the arrival or departure of a guest to be a blessing. A ‘vote of thanks’ was given to us as a sign of their appreciation and to signify that we had blessed their community,” she wrote. “If there are such things as blessings,” Pasquerella wrote, “then surely we were the recipients simply by being in their presence.”

GO DEEPER INTO AFRICA
For more about ACESS, interviews with this year’s student participants, and more photos from Kenya, visit alumnae.mtholyoke.edu/2010kenya.

One response to “President Puts Into Action in Kenya”