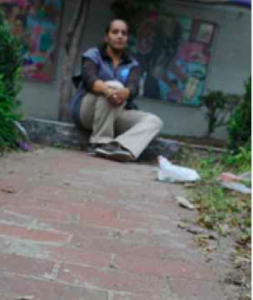 Pattie Knight FP’98 steps out of her car. It’s 8:30 p.m. The sky is dusky and still, but the street, a block of brick apartment buildings in Boston’s Jamaica Plain neighborhood, is full of disquiet.

Earlier in the night, a young woman escorting her children home from choir practice had been shot and killed by an assailant on a bicycle. Neighbors had poured out of their homes, pummeling the guilty teenager. Now they crowded the street, a jostling mixture of mourning friends and family, some wailing and grasping flickering candles, others chugging bottles of beer. Police had arrived, but the children remained in the middle of the hysteria, wondering what had happened to their mother.

Knight, the coordinator of the Children’s Hospital/Martha Eliot Health Center trauma response team, isn’t there to treat the bloodshed—she’s there to make sense of it.

The concept of law and order used to encompass only police, prosecutors, and defense attorneys, but these days—with dwindling state and federal budgets—government leaders have begun to realize that alternatives to arrests and incarceration can save both money and lives. From crime prevention to reentry and rehabilitation, Mount Holyoke alumnae are involved in every aspect of building what they call a smarter criminal-justice system.

For Knight, who majored in psychology and education, this means responding to chaotic crime scenes, and teaching residents and youth in violence-inflicted neighborhoods how to heal from trauma. By helping communities recover, she can help prevent future violence. She calls it “psychological first aid.”

“Historically and statistically, anyone who’s been a victim of violence usually becomes either a victim again or a perpetrator,” says Knight, who joins other counselors at crime scenes, and provides follow-up counseling to victims and their families. “It’s about prevention and intervention in the streets.”

To some in the criminal justice profession, the philosophy isn’t new. In the 1970s, as crime in the United States continued a meteoric rise, the federal government began to offer scholarships to students interested in pursuing PhD programs in criminology. Merry Divinchi Morash ’68, then a social worker, was among those who signed up.

Morash says scholars in the then-emerging field espoused ideas similar to contemporary trends in criminology. Researchers were focused on rehabilitation and the intersection between crime and poverty.

“That continued into the ’80s, when we saw this shift toward punitiveness,” says Morash, the former director of Michigan University’s School of Criminal Justice, and the first woman hired at the department. “The Reagan administration really started this dramatic shift and the overincarceration of huge groups of people.”

In the ’90s, especially under President Clinton, more than twenty-five states passed some form of the controversial “three strikes” law, which imposed mandatory minimum sentences on offenders convicted of certain crimes. But as state prison populations nearly doubled, the country began to see a very slow reversal of the law-and-order philosophy of the Reagan era.

Since the mid-’90s, community policing—which requires officers to build relationships with residents to spot and solve crime—has become the national standard for policing. And Boston’s Operation Ceasefire, an intervention program for gang members, has spread to countless cities. But it’s the recession that finally catapulted a prevention-and-intervention strategy, not incarceration, into bipartisan favor.

In 2008, Congress passed the Second Chance Act, providing funds and resources to cities interested in reducing rates of recidivism, the frequency with which released convicts reoffend and return to prison or jail. Suddenly, cities throughout the country had an incentive to provide parolees with employment and housing assistance, counseling, and substance-abuse treatment. 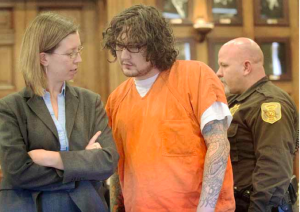 Sarah Churchill Tabone ’99, a defense attorney in Portland, Maine, consults with a client. She participates in an alternative program that allows some offenders to go through a substance-abuse treatment program, rather than serve time.
Photo courtesy of John Ewing, The Portland Press Herald.

Treatment is “far more cost-effective” than jail time, says Sarah Churchill Tabone ’99, a defense attorney in Portland, Maine. “As budgets get tighter and tighter, you look for alternatives.”

Tabone is among many alumnae who pursued law after Mount Holyoke, where she majored in politics, but in recent years, she’s noticed some changes in the court system. In 1995, Maine instituted Project Exodus, an alternative program that allows offenders to go through a regimented substance-abuse treatment program, rather than serve time. In addition to handling her usual high-profile cases, Tabone works in the alternative court alongside a judge, probation officers, and substance-abuse counselors.

“It costs far, far less to treat someone on the outside than to incarcerate them,” she says. “If you can treat that issue and get them sober, you’re bettering society as a whole because then you completely remove them from the criminal- justice system.”

The time after an offender is released from jail or prison is particularly crucial, according to Elizabeth Aaker ’05, who manages two related research programs in the psychiatry department at the University of Massachusetts Medical School. “There’s a critical period after they’re released—approximately six months—when they’re at higher risk for reoffending,” she says.

Aaker’s two programs are designed to reduce recidivism among women coming out of Massachusetts’ primary women’s prison, in Framingham, and to keep war veterans out of the criminal-justice system. Like Maine’s drug courts, the programs require collaboration among previously separate government entities, including the court system, the Department of Public Health, the Department of Mental Health, and the state prison system.

Aaker says she’s found that few judges, probation officers, and prosecutors take into account an offender’s status as a veteran when determining punishment, or an often better alternative: treatment.

“Those folks coming back from Afghanistan and Iraq, 20 percent are coming back with some sort of mental-health condition, and alcohol abuse is 25 percent higher than predeployment levels,” she says. “You start coupling these things together, and when they’re not treated, it’s going to lead to criminal-justice involvement.”

Aaker says she’s also found that a large percentage of female inmates are victims of domestic violence too, or have substance-abuse problems. Which problem came first is often unclear, she says, but treating both problems can reduce a female offender’s chances of returning to the system.

Morash, the criminology professor, has drawn the same conclusions in her research. In her recently released book Women on Probation and Parole: A Feminist Critique of Community Programs and Services, Morash describes the various ways that support and oversight for women on probation and parole could be improved to meet their unique needs more fully.

“If you get public housing, and somebody in your household is violent, you can be evicted in many states,” says Morash, describing one common policy problem. “And so, if a woman who’s doing fine gets evicted and is homeless now and has to live in a drug house, that can undermine everything.”

She is now following and interviewing more than 400 women on probation and parole over a six-month period to analyze obstacles and determine “what really works” for women.

But like many alumnae working to improve the criminal-justice system, Morash has found that funding her projects is a constant struggle, especially when those projects focus on women. Even in a political landscape that has begun to look more favorably at reform, alumnae find it can be difficult to convince government leaders to make the investment.

“It’s in everyone’s best interest that people who are coming out of prison and jail are living free lives, holding jobs, and supporting their families.”—Leah Kane ’00

Leah Kane ’00, a policy analyst for the DC-based Council on State Governments, says it’s not unusual for organizations working in the criminal-justice field to struggle to raise funds. Kane oversees programs throughout the country funded by the Second Chance Act.

“Especially in tight fiscal times, you’re asking legislators to spend money on people who have been to prison, as opposed to someone who hasn’t,” she says. “There are lots of different people who can pull the rug out from under us at any given time.”

Thousands of agencies across the country applied for the government grants, which favored cross-department collaboration. But in order to renew the funds, Kane says the grantees have to prove, in a short amount of time, that their programs work, and legislators have to convince their colleagues that it’s worth the expense.

“So you spend a lot of time trying to convince them that you’re trying to save them money,” Kane says. “It’s in everyone’s best interest that people who are coming out of prison and jail are living free lives, holding jobs, and supporting their families.” Not every organization and city participates in the national competition for money. As cities and organizations battle for the scarce funds for prevention programs, many still operate within a more traditional criminal-justice system. 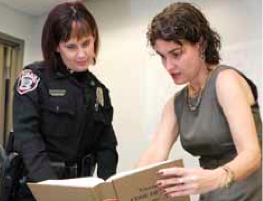 Mary Howell Sirna ’91, first assistant at the Story County attorney’s office in Iowa, says the reality of the court system means prosecutors do not have enough time to take most cases to trial. Most defendants, she says, negotiate plea deals.

“Yes, there’s a lot of push toward prevention, but there’s not a lot of money for it,” she says. “So we unfortunately deal with a lot of the aftermath.”

Because her specialties are crimes of violence including sexual assault, domestic assault, child abuse, and homicide, Sirna says she frequently trains police officers on how to identify primary aggressors and victims, a particularly tricky task in cases of domestic violence. She also speaks regularly at battered- women’s shelters and trains volunteers. The visits, she says, remind her of her days as a wide-eyed Mount Holyoke student, when she volunteered at a domestic-violence shelter. Like so many of the women she met back then, Sirna hid her bruises underneath thick sweaters. While hers were from MHC rugby, theirs, she discovered, came from violent domestic disputes.

Sirna’s glad for the opportunity to teach police officers and victims about the cycle of abuse, which she first learned about in MHC Professor Emeritus of Politics Jean Grossholtz’s Sex and Politics course. “You can’t do it by yourself,” she says.

Even Pattie Knight, the head of the pioneering trauma response team at the Children’s Hospital in Boston, has found that prevention and intervention can be a slow and difficult battle.

When the young woman was killed in the Boston shooting, Knight worked her way through the rowdy crowd, urging calm. She told gangbangers to put away the alcohol and drugs, and tried to quell rumors about the shooting suspect and victim that were coursing through the clusters of neighbors, until she reached the children, who needed the most help of all.

As residents gathered around a makeshift candlelit memorial dedicated to the young woman, another shooter fired rounds into the crowd. It was a crime of opportunity, an alarming trend; the shooter had seen someone he was looking for at the gathering. No one was injured that time, Knight says, but it was a reminder of reality.

“It’s really hard on us as providers and caregivers to see the cycle never end,” she says. “But good people, good organizations are trying to do things to make a difference.”