From Homeless to Harvard 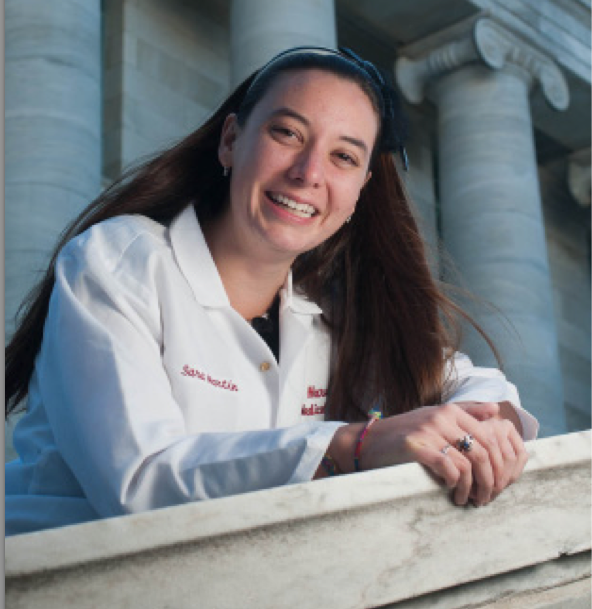 In her first essay for eleventh-grade AP American history, Sara Martin ’10 wrote that she was looking for a challenge but that she wasn’t college bound. “We’ll see about that,” her teacher, Sarah McLaughlin ’00, wrote in red ink at the bottom of the page.

So began a friendship between a teacher determined to make a difference and a young woman who, now twenty- three, just started Harvard Medical School. Later that year, “Ms. M.,” as Martin still calls McLaughlin, “made me apply to Mount Holyoke,” she said, surrounded by packing boxes strewn around the West Springfield apartment she was vacating for the next chapter of her life in Boston.

Made her apply? “She gave me the application and a fee waiver and said, ‘You are going to apply,”‘ says Martin, “I remember crouching down next to her desk and looking at Mount Holyoke’s website with her.”

Growing up in northern California, poverty was a constant because her mother, a dental hygienist, raised Sara alone while suffering from chronic debilitating health problems. During Martin’s sophomore year in high school, her mother had seven surgeries. “I coped by throwing myself into schoolwork,” she says, recounting a moment when she “broke down bawling” upon learning that her mother was scheduled for yet another operation.

Good grades usually came easily to Martin, but higher education seemed an “unattainable dream,” a concept  so foreign that she couldn’t picture herself as a college student. Because she “skated” through freshman year doing minimal work and getting terrible grades, Martin says she was initially rebuffed when she signed up for honors chemistry. “They didn’t think I would do well, but I fought them and got in. That was the first time I was really challenged academically.”

When Mount Holyoke accepted Martin, she went over the catalogue with McLaughlin to pick courses. “That was a very good thing,” Martin says, “because if you don’t start off with a science it’s very hard to get on the science track.” McLaughlin also told her not to miss out on Professor Joe Ellis’s history classes.

Martin had a near-perfect academic record while completing a double major in three and a half years. A succession of internships and campus jobs through the chemistry department built her résumé while helping her bank account. She constantly volunteered for service activities, which included teaching catechism to fourth graders at St. Theresa of Lisieux Church in South Hadley every Sunday.

McLaughlin, who still teaches at Angelo Rodriguez High School in Fairfield, California, says when Martin came to her, she seemed overwhelmed by her own brain. Everything fascinated her, and she was lapping up knowledge. “She didn’t know what direction was up,” says McLaughlin. “She had an innate inquisitiveness I find in people who go to Mount Holyoke. I knew it would be a great place for her because she didn’t know who she was, but she loved everything.”

McLaughlin  was on campus for her tenth reunion the year Martin graduated. As they watched the commencement procession together, Professor Ellis thanked his former student for “sending Sara our way.” He remembers getting Martin’s first mid-semester exam and asking himself, “Who is this creature? She can write, she’s very smart, and she knows a lot about American history.” In time, he learned that “Martin comes from a background that is not normally associated with elite education.” He was impressed with her manner, describing Martin as “deceptive” in that “she is not constantly and neurotically attempting to demonstrate how hard she’s working. In fact, she’s quite the opposite; she glides.”

Martin did independent studies in both history and biochemistry, her other major. The summer between sophomore and junior year, she had an internship with a doctor at a free clinic in Albany, New York. He later took her along on a two-week medical mission to Uganda.

After graduating, Martin found it next to impossible to find work. “It’s really hard to keep yourself motivated, to look for that next job, to keep hoping, when you’ve applied for fifty plus. I was pretty desperate,” she says. At one point she didn’t have a home and was living out of a friend’s car. Eventually she got a position as a pharmacy technician and then a job teaching chemistry in a Springfield, Massachusetts, charter school.

Martin loved teaching, and students appreciated her despite a reputation as a tough grader. “I modeled that after Ms. M.,” she says, knowing that if she wasn’t pushing students she was doing them a disservice. “It has its pros and its cons, because you are always trying to catch that bottom half while challenging the top half. It’s very difficult to achieve that balance at a low-income school,” she says.

That same year she applied to medical schools, adding Harvard to her list “as a joke.” She wants to be a family doctor, whereas top-tier institutions usually attract aspiring specialists. “An MD from Harvard will open many doors for me,” she says. “I am interested in the methods and standards used to set up clinics in developing nations and in building resources for setting up global clinics.”

Looking back and looking forward, Martin’s instinct is to reflect on poverty, both in how she experienced it and what she witnessed in places that include rural Kentucky, Costa Rica (where she went on a Mount Holyoke-sponsored service trip), and Springfield’s New Leadership charter school. She gets most animated when talking about the students she encouraged to seek higher education. “After all this time of people pouring time and energy into me, I was finally able to pay it forward,” she says.

Through it all, Martin exudes a sense of wonder about life and its unexpected twists and turns. Sitting on a packing crate with her cat Kiki on her lap, she says, “from homeless to Harvard in a year and a half. It doesn’t get much crazier than that.”

One response to “From Homeless to Harvard”