Taking Stock of “The Creighton Effect” 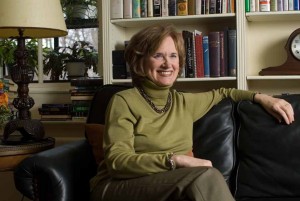 What a difference fourteen years can make. Since Joanne V. Creighton assumed the presidency in 1996, the college’s mission has stayed the same, but much else has been altered significantly. As President Creighton prepares to hand the administrative reins to President-designate Lynn Pasquerella ’80 this June, the Quarterly asked Creighton to reflect on her time as MHC’s leader. Our retrospective includes a president-to-president conversation, and a quick guide to how Creighton’s presidency changed MHC forever, and for the better.

Nancy J. Vickers: These questions are interpretations of questions sent by alumnae, asking Joanne to reflect on her tenure at the college. I’m very grateful for the thoughtfulness of the folks who sent in questions.

NJV: As an alumna, I want to say that I am deeply grateful for what you have done for Mount Holyoke. As you look back on these fourteen years, if you were to single out any particular accomplishment, which gives you the most delight?

Joanne V. Creighton: I’m most pleased with the restoration of institutional self-confidence. That was not being experienced when I came in as president; there was a sense of concern and anxiety. Through The Plan for 2003 and the engagement of the community in the overall sense of moving the college forward, I feel I’ve helped Mount Holyoke to be itself more quintessentially, and to reconnect with its roots and its mission. I don’t think people in the college realized what a strong sense of consensus there was about the college’s fundamental values and roots. It’s remarkably consistent with its historical mission. Many of the things that Mary Lyon said about the college continue to be true, so it was just a matter of articulating that more overtly. I’m very proud that we’re mission centered and that the mission can be stated in a single sentence. It’s about linking academic excellence and purposeful engagement in the world. That core gives the college its intellectual and moral power.

NJV: Is there anything you wished to do that hasn’t gotten done?

JVC: If there were world enough and time, I would like to have addressed more robustly the issue of revenue enhancement. The college needs to bring in additional revenue. Perhaps this needs to be done outside the core mission of the college; maybe graduate, continuing, and professional education options need to be explored.

NJV: What do you see as the biggest challenges facing the college?

NJV: That is true of most colleges, it has to be said!

JVC: The reason in large part is that the kind of education Mount Holyoke offers, which is the finest I have ever seen, is very labor intensive. We have a very enriched environment that is expensive to maintain. Added to that, we have a comparatively needy population of students, which puts us at a disadvantage in revenue generation in relation to most of our peers. That is compounded by the fact that the college is up against every trend in higher education—large, urban, public, coed, professional, nonresidential. Maintaining the model in the face of considerable financial pressure is the challenge for the future.

NJV: If you were to leave a note on the president’s office desk for your successor, what advice would you give her?

NJV: The most frequently asked question by alumnae was “How have the women attending Mount Holyoke changed during your tenure as president?”

JVC: I’ve talked about this with my colleagues, and we all agree that they are smarter, more academically prepared, and without a question more diverse. From the beginning I’ve been impressed with how articulate, engaged, energetic, and idealistic they are. By data measures as well as by one’s impressions, they’re getting better over time.

NJV: In what contexts have you come to know students best?

JVC: They are most impressive when standing forth and delivering. One of the times when I’ve been particularly proud of Mount Holyoke is in the senior symposium, where they are so articulately presenting their research. I have enjoyed the classes I’ve taught or cotaught, and got a sense of their deep engagement with the material.

NJV: And have there been difficult encounters with students?

JVC: Unquestionably the most challenging experience was the student takeovers that came early in my presidency, the spring of 1997. They came very near the end of the Plan for 2003 process, so those things became entangled. I’d thought that we’d gone through a very inclusive, consultative process in which we tried to engage students as well as the rest of the community in developing the plan, but a group of students, more or less at the eleventh hour, wanted to stop that process. They formed a coalition and presented demands and so on. It was a period of only about two weeks, but it seemed much longer.

Trying to make the right decisions in the heat of the moment was very hard. It was a testing ground of my authority, my presidency, and the planning process itself. But a lot of good came out of it nonetheless: the campus community—including the vast majority of students—rallied around the plan and my presidency. As one colleague said to me, “This is your true inauguration.”

NJV:What, when you became president, surprised you most about Mount Holyoke?

JVC: I was especially bowled over by the moral power of the institution. I’d always been at institutions in the past that were more intellectually focused. What’s powerful about Mount Holyoke is its combination of intellectual and moral. I heard from students the repeated articulation of idealistic thinking about themselves and what they want for the future. This idea of purposeful engagement in the world is deeply embedded in Mount Holyoke culture.

NJV: As you look back, is there a single moment you remember with the greatest fondness?

JVC: One thing that’s given me the most pleasure is the sense of camaraderie and team-ness that comes working with senior staff and others. It’s pure pleasure working with people who are so smart and in sync, who individually bring so much to the table and have a commitment to the larger good. That’s what I feel I’ve gained out of the institution—a sense of being part of what Mary Lyon called “this great intellectual and moral machine.”

NJV: Which of these wonderful renovation or building projects that have so transformed the campus is your favorite?

JVC: I think of each of them as my children, each more wonderful than the next. The new residence hall is very successful, but the science center may have had the greatest impact by creating a center out of what was a group of buildings. That sense of science being a single enterprise is manifest in the building in a wonderful way.

NJV: Do you have a favorite spot on campus?

JVC: I think of the campus as a walk. Every day, my husband Tom, my dog Maisie, and I walk. We have lots of routes, and I adore the campus and the circumnavigation around it. If I had to choose one spot, it would be this house. When I’m here [the president’s house], I feel both part of things and that my privacy is respected.

NJV: If you could study any subject at Mount Holyoke, what would you choose?

NJV: How do you think you are different after these fourteen years?

JVC: Definitely older … I think I developed more confidence and competence in the job, and I have connected to the female side of myself more. The academic world is very much gendered male, but Mount Holyoke is gendered female in many ways. There is a communal spirit in the culture that I enjoyed being part of. I feel connected to a community, a place, and an idea larger than myself. And all of that you don’t necessarily get out of an aridly intellectual environment, which is most of higher education.

NJV: So what’s next for you?

JVC: Next year I’m going on sabbatical, during which I will ponder my future. I might return to the college; I hold tenure in the English department and love teaching. I might do something entirely different instead, such as academic consulting. I want to give myself time and space to sort this out. During my sabbatical, I’m going to look at making better known the work of Women’s Education Worldwide. I’ve been particularly impressed with the institutions that are newly emerging in many inhospitable places in the world, and I think their stories should be better known.

NJV: Any final thoughts for alumnae?

JVC: First, I’d say the college is as strong and robust as it has ever been. Secondly, I’d say it cannot exist without you—quite literally can’t exist without the support of alums.

NJV: Thank you, Joanne. Most of all, thanks for an extraordinary fourteen and one-half years.

A New Generation of Faculty Scholars

• Weissman Center for Leadership and the Liberal Arts, established in 1999, offers programming and support for students committed to public service.

• Miller Worley Center for the Environment, founded in 1998, offers programming on environmental issues and a leadership series, oversees student projects, and is developing a campus interpretive trail.

Brigham, Mead, Rockefeller, and the Mandelles

Record Giving to the College