Mallika Dutt ’83: The Making of Breakthrough 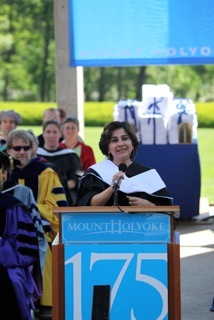 “My mind has begun to play its own rhythm today. My feet, once stilled, are dancing today… My heart is now singing, I have begun to believe in myself.” Based on a true story of escaping domestic violence, these are the opening lyrics to the title track and music video of the album Mann ke Manjeeré: An Album of Women’s Dreams. Produced by Breakthrough, a human rights organization, the project was  an experiment in combining human rights with popular culture. The founder of Breakthrough, Mallika Dutt ’83 was pleasantly surprised, as the track along with its music video was one of the top ten songs in India for more than six months in 2000, and reached twenty-six million households. Breakthrough has continued to use popular culture and media to reach broad audiences with essential messages about human rights. Since its inception, Dutt and Breakthrough have received countless accolades for the wide-reaching, effective approach. The biggest honor of all for Dutt? Being awarded an honorary doctorate at Mount Holyoke’s 175th commencement ceremony. “Many women leaders, myself included, are constantly second guessing ourselves,” says Dutt. “Human rights can be so challenging. And so to have my work recognized by an institution that builds and nurtures such amazing women leaders was heartening and validating in the best possible way.”