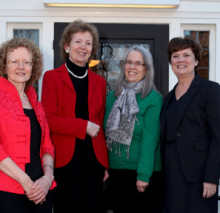 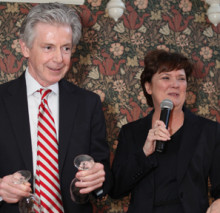 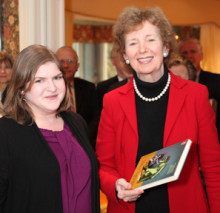 Mount Holyoke president, Lynn Pasquerella ’80, welcomed former president of Ireland, Mary Robinson, to campus on March 9 to discuss “Looking at Climate Change as a Human Rights Issue.” Author of Everybody Matters: My Life Giving Voice, which was published March 5, Robinson has spent most of her career as a human rights advocate. She leads the Mary Robinson Foundation–Climate Justice, a center for thought leadership, education, and advocacy in the struggle to secure global justice for the often forgotten people who are vulnerable to the impacts of climate change: the poor, the disempowered, and the marginalized across the world.

Robinson was elected the first woman president of Ireland in 1990 and later served as United Nations high commissioner for human rights (1997–2002). She also founded and served as president of Realizing Rights: The Ethical Globalization Initiative (2002–2010). Eva Paus, professor of economics, Carol Hoffmann Collins, director of the McCulloch Center for Global Initiatives, and Congressman Richard Neal joined Pasquerella in introducing President Robinson. A reception at President Pasquerella’s house after the speech included many local leaders and representatives of the area’s Irish-American community.