Connecting with Alumnae around the Country 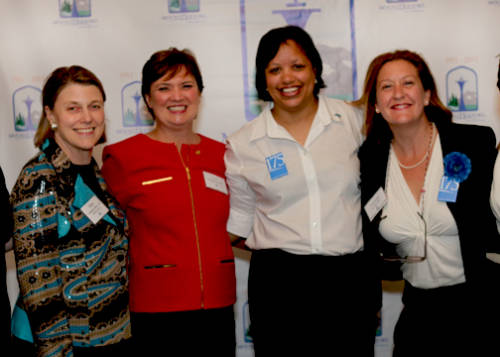 I could not have asked for a better launch to Mount Holyoke’s celebration of educating 175 years of women of influence! Following our spectacular convocation, I had the chance to meet with alumnae, parents, and prospective students at record-breaking events in San Francisco, Los Angeles, and Seattle. After landing in San Francisco, we went straight to the ballpark to catch a Giants and Diamondbacks game with President Roswell Ham’s granddaughter, Susy Ham Heldman ’76, and her husband, Peter. It was an amazing night, with the fog rolling in off the bay, a stunning shutout for the Giants, and reminiscences by Susy about her grandfather’s legacy, her own days at Mount Holyoke, and her annual commitment to leading local alumnae for hikes on Mountain Day.

The events in each of these cities had alumnae representatives ranging from classes in the 1940s through our most recent graduates. We were joined by trustees Eleanor Chang ’78 in San Francisco and Debra Martin Chase ’77 in LA. At both venues, I had the honor of presenting with Professor Darby Dyar, who spoke about the role that she and her students have played in preparing for and monitoring the recent NASA mission to Mars. Darby is an extraordinary example of someone who brings her research into the classroom and labs, and inspires students to reach new heights under her guidance as a mentor and role model.

While in LA, I also had the opportunity to give the keynote address at a medical conference focusing on my own research around ethical issues at the end of life. Through my work on hospital ethics committees over the past two and a half decades, I have noticed a sharp contrast in the types of cases brought to us for review. When I began in the profession in the mid-1980s, almost all of the cases surrounding end-of-life issues centered on attempts to refuse life-sustaining treatment in order to die “a natural death with dignity.” Today, the cases we see invariably involve patients’ families insisting that everything be done to keep their loved ones alive. The result has been a growth in moral distress among caregivers, when healthcare teams feel coerced into acting in ways that they think are unethical, but believe they have no choice but to carry out. I am convinced that our culture, which regards death as a failure, and thus distinctly un-American, has contributed to this phenomenon. Nevertheless, there are ways in which physicians and bioethicists might work together to shape national conversations around dying that would promote the best care possible while supporting both the individual autonomy rights of patients and the professional autonomy of physicians and other healthcare providers.

As soon as my talk ended, we headed for Seattle. Our last stop was made particularly meaningful by the fact that the Puget Sound Mount Holyoke Club was celebrating their 100th year. Joined by MHC Board of Trustees Chair Mary Graham Davis ’65 and trustee David Wilson, Lisa Tompkins ’82, who is the club’s president, orchestrated a truly special night of recognitions, remembrances, and song.

The energy and enthusiasm from our alumnae events stay with me throughout the year. I will be sure to share their stories with students in the near future as we gather on the mountain and keep alive the traditions that connect us across generations and around the world.