MoHome Memories: Making the Most of a Snowy Day

Sledding down the hills of campus 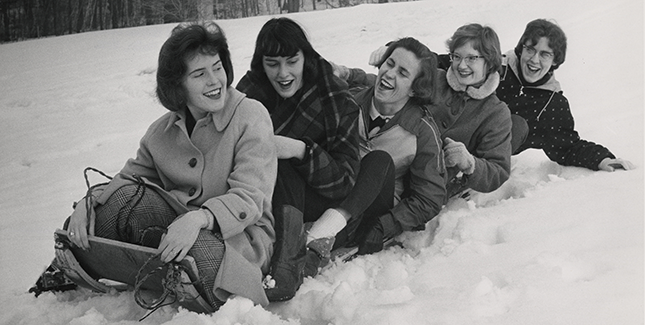 Since its earliest days, Mount Holyoke’s students have had to endure the winters of South Hadley, Massachusetts. While generations of undergraduates have come and gone, one snowy activity has remained a campus favorite over the decades: sledding. Every winter, students can rent sleds from the Mount Holyoke Outing Club, bundle up in their warmest clothes, and head to a hill on campus to take a break from their studies. For the bravest and most adventurous of them, the shortage of proper sleds has never been a deterrent. Cafeteria trays and garbage bags were (and still are) perfectly acceptable—and perhaps even more popular—substitutes for the traditional sled.

We asked alumnae for their memories of sledding on campus. Here’s what a few of them said:

We used to use cafeteria trays on the hill across from Ham and MacGregor until they told us not to use them any more.
—Suzanne Willis ’72

We only ever used trays on the hill above the Mandelles. Wonderful memory. (And I’ll take the cold over the heat any day.)
—Betsy Lawyer Allinson ’73

I never did it. Too terrified, but lots of others did. Looked like such fun.
—Virginia M. Lincoln ’82

We’d borrow some trays from the kitchen and go “traying” down the hill when it snowed. It was great fun but we definitely hit some bumps on the way down. I’d be finding black and blue marks for the next couple of days!
—Margaret (Mugzie) Flitsch ’93

Having worked in the kitchen in the Mandelles, I MAY have been a supplier of trays to my friends. Of course we always returned what we borrowed. I remember grabbing a pile of trays one night and going out back to the hill. I wish I could remember all our partners in crime, but rest assured Mugzie was there. Cold and dark with just enough light to keep things interesting. Definitely one of the many benefits of living in the Mandelles!
—Trish Palmiere ’93