On Display: Stitched Together 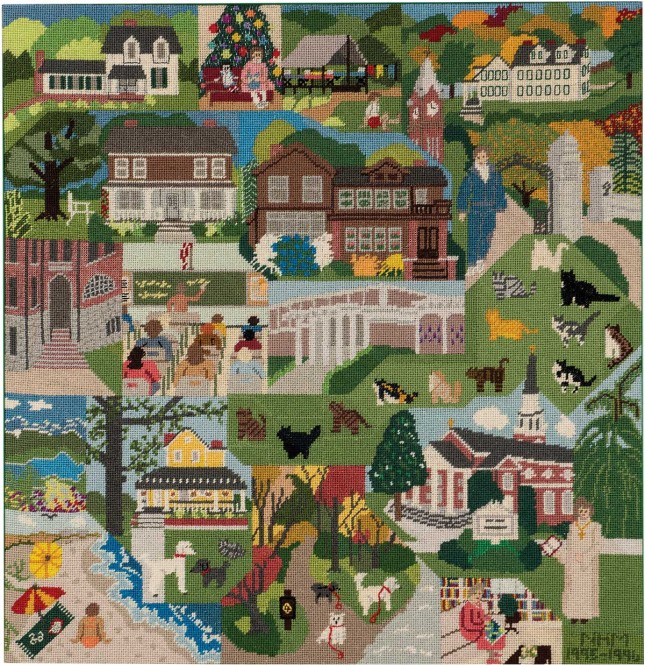 Every time Gretchen Mettler paid a visit to her aunt Nan at her home in Akron, Ohio, she was greeted by a vibrant needlepoint on the wall of the living room. Entitled Autobiography, the piece showcases Nancy H. Mettler’s ’38 rich life experiences—from the houses she lived in and the church she attended to her beloved pets and her time spent at Mount Holyoke. In fact, the College had such a profound impact on Mettler (she remained best friends with her freshman roommate, Sara L. Milner ’38, throughout her life), that her niece generously donated the needlepoint to the Mount Holyoke Archives and Special Collections after Mettler passed away in 2011 at the age of ninety-four.

A lifelong resident of Akron, Mettler returned to her hometown after earning a degree in zoology at Mount Holyoke. She taught high school English for thirty-five years and in 1975 received a fellowship from the Martha Holden Jennings Foundation, which supports the advancement of Ohio teachers. After retirement Mettler served as a full-time volunteer at St. Paul’s Episcopal Church, where she was a founding member of the Needlework Guild. It was during this period that she created Autobiography, among many other pieces. Perhaps hearkening back to her zoology days, she found cats to be ideal companions, surrounding herself with them and even including them in her needlepoint.