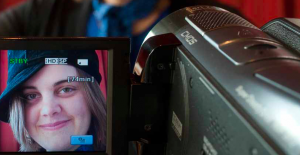 Clarity Guerra ’09 Proves MHC Is Ready for Its Close-up

Clarity Risska Guerra’s first job out of college was to go back to college—not as a student but as an observer, a chronicler, and a messenger to the YouTube generation.

Since last spring, when she was an MHC senior taking a digital film production course, Guerra has been producing short movies. What started as an academic exercise morphed into a vocation when Patricia VandenBerg, executive director of communications and strategic initiatives at the college, asked Guerra to join her staff and make videos about different aspects of life at Mount Holyoke. “She offered me the job as I was coming back from swim class. I was soaking wet in the freezing cold and in a bad mood,” Guerra recalled during an interview in the cubicle in Mary Woolley Hall that she has transformed into a digital-editing suite.

An environmental studies major, Guerra wasn’t sure if making promotional videos was the career move she was looking for, but the job’s appeal proved irresistible. Since September, Guerra has been posting a steady stream of short videos to the Mount Holyoke YouTube account on topics such as a hip-hop course given by Brooklyn-based dance artist Jennifer Weber. (Did you know that B-boying, aka break dancing, is “the foundation of all hip-hop?”) There is one on a papermaking class taught by Associate Professor of Art Rie Hachiyanagi. Guerra’s lens also captured the introduction of Lynn Pasquerella ’80 to the campus community as Mount Holyoke’s eighteenth president. The video uses the snappy graphics, engaging soundtracks, and impromptu interviews characteristic of Guerra’s work.

During the NCAA Division III women’s field hockey championships played on campus last fall, Guerra could be seen haunting the sidelines and stalking the stands with her tripod, buttonholing fans and participants willing to talk into her high-definition camera. She captured not only the excitement of the event, but also the hard work done behind the scenes by a student organizing committee—and the contribution that experience made to their education. Guerra knows that her work is helping to shape Mount Holyoke’s image, especially among new media-savvy applicants. Her mandate is not to take that responsibility too seriously. Her marching orders are to have fun, which she says is exactly what she is having. Maybe that is why her affection for the college comes through seemingly effortlessly as she explores the rich smorgasbord of activities on campus. Her productions aren’t slick in a conventional sense, which is a good thing. They are serious, yet exude personality and humor. For example, in a video extolling the virtues of the Kendall Sports and Dance Complex, Guerra throws a clip into reverse so that a line of racers magically emerges feet first from the water, landing in a perfect crouch with a waveless, almost glass-like pool in front of them. In the hip-hop piece, silly moments and less than utterly graceful poses are preserved, injecting a sense of authenticity along with a few yucks.

“I am very fortunate in that my personal experience of the college is in line with what they are trying to convey. So I don’t have to betray myself by saying, ‘Oh, I have to make Mount Holyoke fun, when it’s not really fun,’” said Guerra. Her ideas get green-lighted as fast as she comes up with them. Recently she accompanied Mount Holyoke women on a trip to New York City’s Anthology Film Archives. That became a three-minute piece of cinematography combining iconic moving images of hustle and bustle with thoughtful sound bites from Robin Blaetz, chair of film studies, and her students. Tying it together is music that Guerra crafted on her laptop using SoundtrackPro, an application that allows her to create original soundtracks.

Practitioners of her craft must be ever mindful of copyright issues, so knowing how to use the software is integral to the creative process. “I like some of my images to be cut to the music, so I’ll mix the music first and cut the images to it,” says Guerra, “but if there is a certain sequence of images I like already, I’ll drop that into this program and then edit the sound to it.”

Recalling the trials and pleasures of rowing as a student, Guerra accompanied the crew team to a workout that got under way at 5:30 a.m. She put a driving beat under interviews, some of which tend toward the bleary-eyed, and action shots that include bench pressing, jumping rope, and putting oars into indoor tanks.

Guerra hopes to build a livelihood that combines environmental science with the journalism talent that she is discovering as she hones her communications skills. A native Los Angelena whose father, Cástulo Guerra, is a successful actor who has appeared in hits including Terminator 2, Amistad, and the television series “The West Wing,” Clarity Guerra never considered a career in film.

Guerra attended a magnet high school associated with the Los Angeles Zoo. As a senior there, she went on a study excursion to the Virgin Islands Environmental Resource Station, making videos documenting events such as preparations for a midnight snorkeling expedition. Guerra credits a course at the University of Massachusetts taught by journalist Madeleine Blais with opening her eyes to how to find and convey stories that arise out of real events.

Part of the fun of her Mount Holyoke job is featuring her favorite mentors. “I loved my organic chemistry professor,” she said. Now Sheila Ewing Browne can be found on the Internet heralded as one of “the coolest professors on the planet.” Viewers learn that not only did Browne receive a Presidential Award for Excellence in Science Mentoring, but she also has a thing for Cajun zydeco dancing and got her scuba diving certification on a trip with students to Key Largo in 2007.

Guerra’s videos are migrating beyond YouTube to other parts of the Mount Holyoke Web site, such as on departmental home pages. “What I’ve been trying to do with these videos is to re-create for people highlights of my own experience,” said Guerra. The challenge with each new project is figuring out “how to communicate something that’s hard to communicate, like the feeling that you get when you walk onto this beautiful campus, full of intelligent women, in a vibrant and diverse community.”