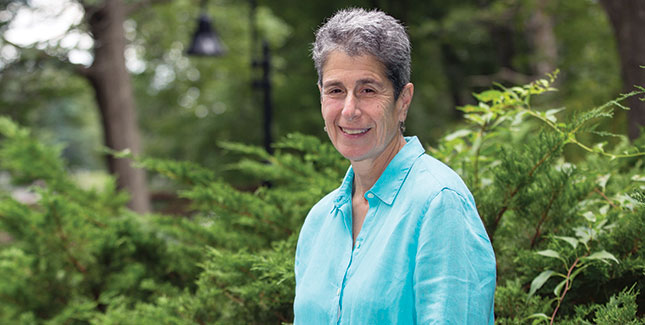 After teaching at Hofstra University and serving as chair of the computer science department and director of interdisciplinary programs at Union College, Valerie Barr ’77 was appointed to Mount Holyoke’s Jean E. Sammet Endowed Chair in Computer Science last fall. The honor comes after years of following in the legendary footsteps of Sammet, a 1948 graduate of the College. Both Barr and Sammet came to Mount Holyoke at age sixteen, and Barr recently completed a term as chair of the Association for Computing Machinery Council on Women in Computing, of which Sammet was the first female president. Barr also shares Sammet’s passion for interdisciplinarity: a fundamental belief that in order for students to succeed in the world, they need a well-rounded educational experience that instills in them the abilities to make vital connections and to solve problems.

On her vision for the department:

We are embarking this year on a curriculum review with an eye toward expanding offerings in ways that will make our courses appealing toward a wider range of people at the College. With the ubiquity of computing everywhere, we have an obligation to prepare students, regardless of their major, to be able to help address problems that lie at the intersection of fields. I really want to work on building connections across campus that both bring other students over to computer science to get a foundation [and] send the computer science students to those fields because of the potential to apply computing in those fields.

There are plenty of people out there doing just plain old ordinary computer science. We need to have a different job and mission.Valerie Barr ’77

Mount Holyoke students are going off to be software developers and to work at places like Google, Amazon, Facebook, and Microsoft, and I’m certainly thrilled that the caliber of our programs is such that they can go do that. But I also have a student who is a double-major in biology, and I say, “You should be looking at the medical device world; healthcare is a tech industry. Every industry is a tech industry, so you don’t have to go to the top five [tech companies]. You can go into any field from computer science.”

On following in Jean Sammet’s footsteps:

The course she taught at Mount Holyoke in 1973 was all about humanities and social science applications of computing. When she was here in 2016, I had the good fortune to be at dinner with her and she said, in her very Jean way, “We didn’t bother with the sciences. That was easy. We did really interesting stuff like talk about anthropology and archaeology and applications of computing.”

To be doing the work I want to do seems really to fit. It’s very much in keeping with what Jean was thinking about in 1973 and the direction I think computer science should be going. I think it is part of my job to make that happen here at the College.

This article appeared as “Taking an Interdisciplinary Approach” in the winter 2018 issue of the Alumnae Quarterly.